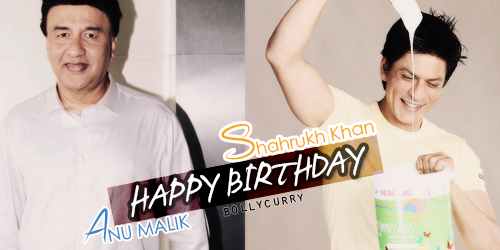 
Shah Rukh Khan, known popularly as SRK, was born on 2nd November in the year 1965. A Baadshah in his own right, Khan grew up in Delhi and spent his youth participating in stage plays and studying acting. He has a Bachelor's degree in Economics and started studying for a Masters in Mass Communications before leaving to pursue acting. He married Gauri Chibber (now Gauri Khan) in 1991 and together they have three children - Aryan, Suhana and AbRam respectively.

Khan has starred in more than 80 Hindi films of various genres. He made his debut in the 1989 television series, Fauji. He played the role of Abhimanyu Rai which earned him both critical acclaim and mass fame. He kick started his Bollywood career with Deewana(1992) in which he played the second male lead. He nailed the role, Deewana went on to become a box office hit and Khan went on to receive the Filmfare Best Male Debut Award. During the years 1993-94, Khan was recognized for starring in mostly negative roles, most notably Darr (1993) and Baazigar (1993). He truly stamped his name, however, when he effortlessly played the romantic hero in some of his most popular movies, particularly Dilwale Dulhania Le Jayenge (1995), Dil To Pagal Hai (1997) and Kuch Kuch Hota Hai (1998). His 2002 film Devdas, a Hindi adaptation of a novel of the same name by Sharat Chandra Chattopadhyay in which he played the role of an alcoholic, received a special screening at the 2002 Cannes Film Festival and a BAFTA nomination for Best Foreign Language Film. Khan received outstanding acclaim for his role in Swades (2004), so much so that many critics consider it, to date, his finest performance. He was honoured with a Padma Shri by the Government of India in 2005.

He then went on to star in major blockbuster movies including Veer Zaara (2004), Chak De India (2007), Om Shanti Om (2008), and My Name Is Khan (2010) which won him his eighth Filmfare Award setting a record-breaking win alongside Dilip Kumar. In 2013, he starred in Chennai Express, in which his name appeared after the name of his female co-lead Deepika Padukone, a desire Khan himself had expressed which has also been carried forward in his latest flick, Happy New Year. By all means, Khan is a legend.

Here's a mini playlist of some of the most popular songs from movies Khan starred in.
Anwar Sardaar Malik, known as Anu Malik, was born on this date in the year 1960. The talented and very versatile music composer is the son of veteran music director Sardar Malek. He took training in music under his Guru Pandit Ram Prasad Sharma. He has composed for over 350 films.

He made his debut with the film Hunterwali (1977) and made himself known through films like Sohni Mahiwal (1984). However, he only achieved his breakthrough in the year 1993. His songs for Baazigar (1993) were among the most popular of the year. He continued to dish out good music for Main Khiladi Tu Anari (1994), Akele Hum Akele Tum (1995) and saw the peak of his career with Virasat (1997) and Border (1997). Malik is known for the use of tabla in his songs, which is most notable in "Mere Humsafar" from Refugee (2000). His music is also particularly refreshing for its melodious beauty, which is notable in his music for Kareeb (1998) and Fiza (2000). He has also done a few playback songs for his compositions, including "East Aur West India Is The Best" in Judwaa (1997). Malik is indeed a gifted music director.