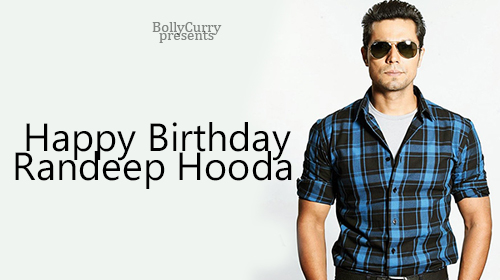 BollyCurry celebrates the birthday of an actor who has given impeccable performances in relatively insignificant roles, Randeep Hooda.

Born on August 20, 1976, to Dr. Ranbir Hooda and Asha Hooda, Randeep Hooda was initially brought up in Rohtak, Haryana. He has two siblings, an elder sister and a younger brother.

After an eventful student life followed by modelling and amateur theatre, Hooda made his Bollywood debut with Mira Nair's Monsoon Wedding in 2001. He did his second project four years later - the gangster film D (2005). He received positive reviews for his role and was critically appraised, but his career hit rock bottom when he appeared in a series of unsuccessful films like Darna Zaroori Hai (2006), Risk (2007), Karma Aur Holi (2009), and Love Khichdi (2009).

Hooda has won the Lions Gold Awards for Favourite Actor in a Supporting Role for Once Upon A Time in Mumbaai as well as the Stardust Award for the Best Actor for his noteworthy performance in Highway. He has managed to carve a niche for himself in the industry and is a storehouse of acting potential.

Here is a small playlist of the actor to celebrate his birthday:

We wish the actor a very happy birthday and hope that he manages to make an even deeper impression on the hearts and minds of the audiences than he already has.

neutrality 5 years ago one of the most under rated actors of our country...