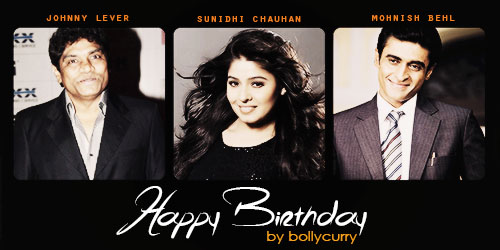 Today, BollyCurry celebrates the birthday of two contemporary Bollywood actors and a singing diva. We are talking about the birthdays of Johny Lever, Mohnish Behl and Sunidhi Chauhan.
Turning 57 today, the veteran actor Johny Lever has gone a long way to gain a place for himself in Bollywood. Lever was born  as John Prakash Janamuta in Prakasam, Andhra Pradesh and was brought up in Dharavi, Mumbai, Lever's mother tongue is Telugu. He did not receive any formal education as it came to an abrupt halt when he was in seventh grade, due to monetary issues. He did odd jobs after he quit school to make ends meet. His zeal to make it big paved a way for his success. Lever did not miss a single chance to make it count for Bollywood. Be it pen selling by mimicking Bollywood celebrities like Amitabh Bachchan or doing charity shows. Spending a  few years in Yakunthpura near Hyderabad, helped boost his career.
Lever got his ticket to Bollywood while he was performing for a show "Hope 86". He was noticed by producer Gul Anand, thereby earned a chance to star in the movie Jalwa (1987). Over the years, Lever has starred in as many as 350 films such as Tezaab (1988), Khishen Khanaiya (1990) and  Kasam (2001). He has won various awards including three Filmfare Awards for Comedy and is known as one of the best comedians in Bollywood. Besides acting he has served as a president for CINTAA (Cine And TV Artist Association) and MAMA (Mimicry Artist Association). Lever's recent film that hit the theaters is Entertainment (2014).  In regards, to his personal life he is happily married to Sujata Lever and has two children.
In order to relish the career of this veteran star, here is a mini-playlist of some of his popular songs:
On the other side we have Mohnish Behl who is turning 53 today. Born to Rajnish Behl and Nutan an actress from Samrat-Mukherjee family. Behl started his career with movies like Bekaraas (1983), Meri Adaalat (1984) and Itihaas (1987). However, these movie failed to give him recognition. Behl eventually transformed into a villain with movies like Maine Pyaar Kiya (1989) alonside  Salman Khan. Proceeding with his association with Salman Khan has resulted in movies like Baaghi: A Rebel For Love (1990), Hum Aapke Hain Kaun (1994), Hum Saath Saath Hain (1999) and recently, Jai Ho (2014). In the span of three decades, Behl has starred in about 80 movies as a supporting actor.
Apart from cinema Behl has starred in TV shows like Dil Mill Gaye where he met his future wife, Ekta Solanki. The couple now has two children Pranutan and Krishna. He was last seen in the TV show, Kuch Toh Log Kahenge as Dr. Ashutosh Mathur, alongside TV beauty Kritika Kamra.
On his birthday, here is a small playlist of his hit songs:
Alongside these two actors the dazzling singing icon Sunidhi Chauhan also celebrates her birthday today, Born as Nidhi Chauhan in New Delhi. She started singing at the age of four with her father who was a minor theatre personality. She came into limelight through the show "Meri Awas Suno" which was telecasted in Doordarshan in the year 1996. She completed her schooling from  Greenway Modern School, Dilshad Garden. She got her first break in Bollywood with Ram Gopal Varma's Mast (1999) with the song "Ruki Ruki". Over the years she has sung in many languages like Hindi, Tamil,Telugu, Kannada and Oriya. This talented singer has also lent her melodious voice to Pakistani songs. She released her her first single album "Ab Laut Aa" with Anjay Deb. Besides singing she has lent her voice to Bollywood actresses like Kajol for Fanaa (2006) and for Mahuri Dixit Nene for Aaja Nachle (2007). She has also given her voice to Rani Mukerjee's Mardaani (2014).
On the personal front, she married Bobby Khan in 2002, however it was disapproved by her parents thereby disowning her. At a later stage the duo separated and in 2012 she married friend cum composer Hitesh Sonik in a low key wedding ceremony.
Here is a popular playlist which recalls her mesmerizing voice to celebrate her birthday:
On behalf of BollyCurry and all their fans, here's wishing Johny Lever, Mohnish Behl and Sunidhi Chauhan a very happy birthday along with a bright year and successful journey ahead.
Author:  Vaishnavi V.
Editor(s): Nisha M. and Sonia R.
Graphics: Virina R.

Do you have a suggestion or comment for BollyCurry? Drop us a PM at BC_Dropbox today.
10 Likes