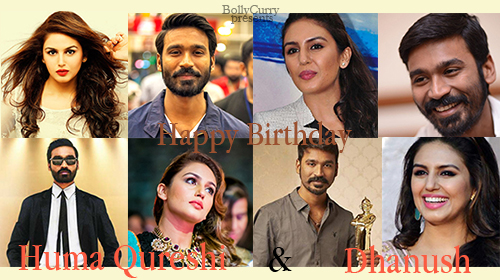 The 28th of July marks the birth anniversary of not one, but two strong personalities of the acting fraternity - Huma Qureshi and Dhanush. As we celebrate with the actors and their families, BollyCurry would like to pay a tribute to both of them as a small gesture of our love and appreciation.

Delhi born Huma Saleem Qureshi was first discovered by Anurag Kashyap after her commercial with Samsung Mobiles and he decided to cast her in his movies. She started her Bollywood career with Gangs of Wasseypur 1 and 2 (2012) and went on to do popular films such as Dedh Ishqiya (2014) alongside Madhuri Dixit Nene and Badlapur (2015) alongside Varun Dhawan. As a daughter of the popular restaurateur, Saleem Qureshi, and a holder of a History Honors from Gargi College, University of Delhi, Qureshi had no idea that someday she'd end up in the glam world of films.

To celebrate the occasion, BollyCurry has compiled a few songs from Qureshi's films.

Dhanush, without a doubt, is more popular down South, particularly in the Tamil cinema, but his contributions to Bollywood are also noteworthy. Born and raised in Chennai as Venkatesh Prabhu Kasthuri Raja, it was no surprise that he was coerced into the acting profession by his father, the famous Kasthuri Raja. He made his Hindi debut in 2013 with Raanjhanaa opposite Sonam Kapoor. Although his career in the Hindi cinema is just two films old (the second being Shamitabh (2015)), his talent and skills have long been an established part of Kollywood, as cemented by the fact that he has been awarded two Filmfare Awards South.

The thirty two year old is married to Aishwarya Rajnikanth, daughter of the celebrated actor Rajnikanth. The duo has two sons, Yatra and Lingan.

As homage, we've compiled a small playlist from Dhanush's films.

On this special day, BollyCurry wishes both Dhanush and Huma Qureshi all the best for the day and may they both have a splendid year and a successful career ahead of them. You can also give them your best wishes by commenting in the section below.

Editors: Pooja B. and Gunia K.