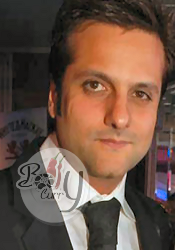 Fardeen Khan turns 38 on March 8th this year! Though, the actor isn't counted as one the hottest of the Khan's in the film industry, he's definitely had a place in Bollywood, more so because of his legendary father (late) Feroz Khan. He made his debut more than a decade ago in the 1998 disaster Prem Aggan and has featured in movies like Jaanasheen, Shaadi No.1, Just Married etc since then. Ever since his father's death, Fardeen hasn't been seen much, other than in a few choice events. Apparently, he's also gained a few pounds and may be out of shape. He was last seen in the movie Dulha Mil Gaya as Tej Dhanraj, which unfortunately did not do well at the box office.
As he adds another year to his blessed life, we at BollyCurry, wish him a joyful birthday and an even better year to come! May success reach him in no time and in numerous ways!