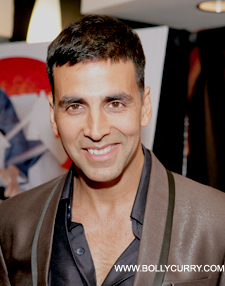 It's a well-known fact that since son Aarav was born, Akshay (or Akki, as he's fondly called), takes the day off from being in the public lime-light, instead choosing to spend the the day with his family in leisure. He enjoys the special occasion every year by relaxing and having simple, private fun with the family! After a quiet cake-cutting ceremony with his mother, the actor usually takes his wife, Twinkle Jatin Khanna, out for a special dinner. However, last year, Twinkle threw a surprise for hubby by inviting a handful of close friends including Ritesh Deshmukh, Sajid Khan and Sajid Nadiadwala to bring in the new age. It was also on this very day that producer Vipul Shah unveiled the first look of the Akki and Aishwarya Rai Bachchan starrer, Action Replayy, as a birthday present!

This year, however, plans may again alter from the usual routine for the actor. Buzz has it that Akshay is to attend the TIFF (Toronto International Film Festival) in Toronto, Canada on September 9, 2011. Akki will be there to launch his movie Speedy Singhs, also known as Breakaway on the international front! Apparently the whole cast is to attend the event including Vinay Virmani, Russell Peters, Rob Lowe, Camilla Belle, Noureen DeWulf and Anupam Kher, as well as the people behind the music such as RDB, Josh, Jassie Sidhu, Bohemia, H Dhami and Veronica, who are speculated to be performing live! Being the co-producer of this Canadian/Punjabi comedy-drama as well as starring in a cameo, we can't see how Akki can get out of this one!

With so many to share his birthday with, Akki is sure to have a grand time indeed. Meanwhile, BollyCurry also extends its warm wishes to our Khiladi!