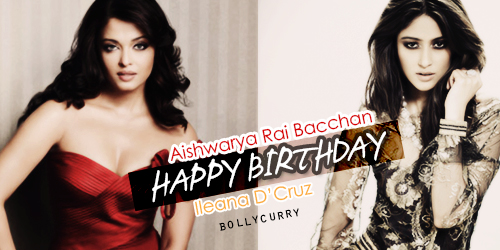 Today BollyCurry gathers it's readers to celebrate the birthday of two very beautiful and suave actresses. Yes, 1st of November celebrates the birthdate of Aishwarya Rai Bachchan and Ileana D'Cruz!

Rai was born in Bunt family Mangalore, Karnataka in 1973. Her father, Krishnaraj is a marine biologist and mother Brinda, a homemaker. She has an elder brother Aditya Rai. Rai did her schooling from Arya Vidya Mandir High School, Mumbai. Later, she completed her higher education from Jai Hind college and DG Ruparel College, Mumbai. She is married to Abhishek Bachchan and together they have a daughter, Aaradhya Bachchan.

Starting her career as a model in 1991, she went on to win the prestigious Miss India and Miss World pageant titles in 1994. This green eyed beauty made her acting debut with Mani Ratnam's Tamil film Iruvar (1997). Later, she debuted in Bollywood with Aa Laut Chale (1999) directed by Rishi Kapoor, but earned recognition with Sanjay Leela Bhansali's Hum Dil De Chuke Sanam (1999) co-starring Salman Khan and Ajay Devgn. For which she bagged her first Filmfare Award for best actress. This was the turning point in Rai's career. She went on to do various successful movies like Taal (1999), Devdas (2002), Raincoat (2004), Dhoom 2 (2006), Guru (2007), Jodhaa Akbar (2008), Sarkar Raj (2008) and Guzaarish (2010).

After a temporary hiatus from the screen, Rai will star in Jazbaa, an action thriller directed by Sanjay Gupta which is scheduled to begin filming soon.

Here is a mini playlist of some of her chartbusters:
D'Cruz on the other hand was born in Mumbai in 1987. She was brought up partly in Mumbai and partly in Goa. She started her film career in the Southern Industry with a Telugu film Devadasu (2006) and later, went on to act in blockbuster movies including Pokiri (2006), Munna (2007), Jalsa (2008), Kick (2009), Nanban (2012) and Julai (2012). She bagged her first Bollywood film with Anurag Basu's Barfi! in 2012, co-starring Ranbir Kapoor and Priyanka Chopra. She later took up  Phata Poster Nikla Hero (2013) and Main Tera Hero (2014) alongside Shahid Kapoor and Varun Dhawan respectively.

D'Cruz's upcoming project is Happy Ending starring Saif Ali Khan, Govinda and Kalki Koechlin which is all set to release globally on November 21, 2014.

Here is a mini playlist of some of her popular songs:
Do you think you know these actresses inside out? Find out by taking the trivia quiz below!

Trivia Quiz
On behalf of BollyCurry, here's wishing both the Aishwarya Rai Bachchan and Ileana D'cruz a marvelous birthday and best wishes for their upcoming projects!
Writer: Peehu A.
Editor(s): Nisha M. and Sonia R.
Graphics: Virina R.
Do you have a suggestion or comment for BollyCurry? Drop us a PM at BC_Dropbox today!
Answers:
0 Likes