SAB, India's 1st linear family comedy entertainment channel, adds another link in its chain of comedies with the launch of a new show 'Gunwaale Dulaniyan Le Jaayenge'. Based on the life of a gangster family, SAB brings forth the crazy antics of this bizarre family caught in the whirlwind of their interpretations of good v/s bad deeds. Featuring stalwarts of Indian television like Sudhir Pandey, Himani Shivpuri, Vijay Kashyap and Sushmita Mukherjee the daily doze of total laughter and amusement begins from March 16, 2009 at 9:30 pm every Monday to Thursday. 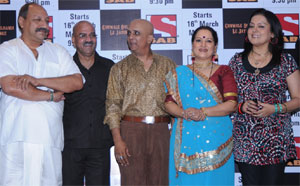 'Gunwaale Dulhaniyan Le Jaayenge' reveals a perspective of values and morals of a family of gangsters. Being associated with crime and criminal activity has been the tradition of this family and the current generation strives to uphold these unique values. Set against this unique backdrop, normal lives and daily chores of three generations living together makes this rib-tickling series, a comedy with a difference! The highlight of the show is the superlative characters played by a pool of talented actors.

Speaking on the launch of this hilarious show, Anooj Kapoor - Business Head, SAB said, "We at SAB are proud to bring differentiated programming to our viewers. After having successfully launched India's first horror comedy, we now add another first to the history of Indian television with the launch of a gangster comedy - 'Gunwaale Dulhaniyan Le Jaayenge'. Unlike any other show seen on television, SAB stretches itself to the very edge in the comedy genre and ensures maximum entertainment for the entire family."

Sprinkled with a lot of craziness, the Don family takes its viewers on a roller coaster ride with each of their peculiar habits successively converting into an exasperating laughter riot. Watch as the cast of this unique show brings complete confusion and comical chaos as they go about their daily lives of running their ancestral business of crime and criminal activities.

*Shruti* 11 years ago Let''s see if the show creates a mark like other shows of SAB!!