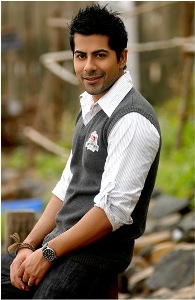 
He will enter as the suitor for Meghna (Priya Ahuja).

Elaborating on the track our source says, "A guy will soon enter the show to see Meghna (Priya Ahuja) for alliance. The entire family will be shocked to see the guy. The 26 year old fellow sports grey hairs and has a weird look. Since they get a wrong impression about the guy, they refuse the alliance".

Talking about the character our source states, "Gunjan Utreja will be essaying the role of Rohit who is a very intelligent business executive, who has a witty personality. He has come down to find his dream girl who has to be simple, intelligent and can be his friend instead of being a typical wife".

The story will proceed when the family refuses Rohit's proposal after which he will impress the whole family with his witty talent.

We contacted Gunjan Utreja and he confirmed the news and said, "Yes, I will be entering the show as Rohit; I don't know how much I can divulge about my character but basically the guy has few defects in him that will be over shadowed by his talent. He will ultimately win over the heart of the family and the girl".

+ 5
9 years ago Gunjan is probably a girl and guy namee like Kiran .. i know guys named kiran and girls named kiran..prob same

anyways..i like the showw..kindaaaa at timeess i actuallyy got a little interested seeing this particular track..so i hope they show megha and rohit scenes and storryy as well not just ginny and dhruvv who actually bore mee .. megha and rohit are more interestingg.

+ 3
9 years ago both BHPH & CCKP have different concepts so it wud be the best for all not to compare! :) GUNJAN is HIS name?? :O

utrejak 9 years ago Best of luck brother.. we know u gonna rock :)

9 years ago will u guys just stop bashing BHPH, its long gone now and every show is diff in its own way so pls just stop comparing...

9 years ago yea me too..looking foward to his entry..love the new show

9 years ago BHPH has it own fans.Do not compare with CCKP.