Star Plus and Sphere Origins' Gulaal will take a 10 year leap in April. This leap has been on the cards from the time Gulaal (Mansi Parekh) married her 10 year old devar Kesar!! 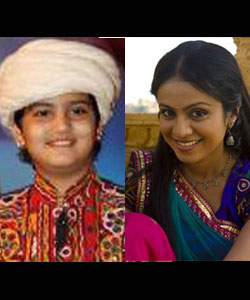 A little birdie tells us, "The team is planning the next phase of the story right now. Casting is on for the introduction of the post leap characters. Initially, there were plans to show Rahil Azam as the grown-up Kesar. However, this development might not happen now as the production house is planning to cast a new face to play the grown-up Kesar. The character of Talli, presently played by Sparsh Khanchandani will also be part of the post leap story".

We hear that there is a faint possibility of Rahil Azam coming back as Vasant. However, this will again depend on the ratings of Gulaal. The leap was to happen in the last week of March, but it has now been pushed to April.

Our source tells us, "The show has got stagnant at the 2 TVR mark and has not been showing any sign of improvement. With lot many shows being planned on Star Plus, Gulaal is one of the shows that has been placed under the scanner. If things do not fall in place, Gulaal might be shown the door post IPL. Looking at all this, one can clearly say that the leap might just be the last chance that the show gets to stake its claim".

We tried contacting Rahil Azam to know whether he has been approached for a comeback as Vasant, but we could not get thro' to him.

We tried contacting Producer Sunjoy Wadhwa for a confirmation on the leap, but he too remained unavailable.

However, a reliable source connected to the show did confirm that the leap is surely coming!!

..Apz.. 9 years ago neil bhatt as kesar is doing a superb job...hes pefect as kesar...TRPs surely have increased...

FireSafireFiree 9 years ago story is very intresting now.. long as they keep kesar & gulaal together

it defo will gain TRP.. they have interesting chemistry

anupamg 9 years ago the show is really good, want to see vasant come back after lost memory or coma

_KAYNAAT_ 9 years ago raahil shud come back dont look 4 new faces...SP promote ur serial instead of showing doors or changing the tymslot

raspberrytorte 9 years ago i like manasi parekh (gulaal) and the guy who plays dushyant they r very gud. i thnk kesar and talli shud get married

krutiv100 9 years ago The cast is brillant and the serial started off on a postive note and went from strength to strength until Vasant was killed of that was the downfall of the show in my opnion.....
Mansi Parekh is very good as gulaal and the actor who plays Dushyant is brillant....
I dont watch it so much now i loved the charcter of vasant and rahil too....i hope he comes back post leap....

Shee_xaan 9 years ago Mee too I dont understand about this trp chakker. SP problem. They promote few dramas.

BoredNCynical 9 years ago Either it is Rahil or anyone else, I will trust the writers to give me a very good track based on their past record with this serial.

One of the best teams I have seen so far, in providing both meaningful entertainment as well as excellent quality content.

Providing meaning quality content with a lead pair present itself is a tough job, but to have done it the way it has been done is def. worth great commendation.