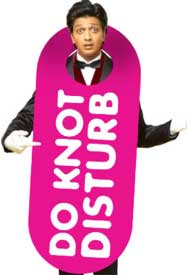 David Dhawan's forthcoming directorial venture Do Knot Disturb will see the pairing of actors Govinda and Riteish Deshmukh on screen for the first time. But the actors already share a connection from before, apart from films.


According to our source, "Govinda and Riteish got along very well during the shooting of Do Knot Disturb from the very first day. They would play a lot of pranks and keep on joking continuously. No one could ever make out that this is the first time they are shooting together. Their chemistry is very good". The source further adds, "People would often tease them saying the reason for their chemistry was their Congress party political connection. Riteish Deshmukh's father is a MP of Indian National Congress Party and so was Govinda."


David says, "Yes, Govinda and Riteish got along very well on screen and off screen during the shooting of Do Knot Disturb. We would often tease the two saying the reason for their special bonding was their Congress Party connection."


So much for friendship in tinseltown!