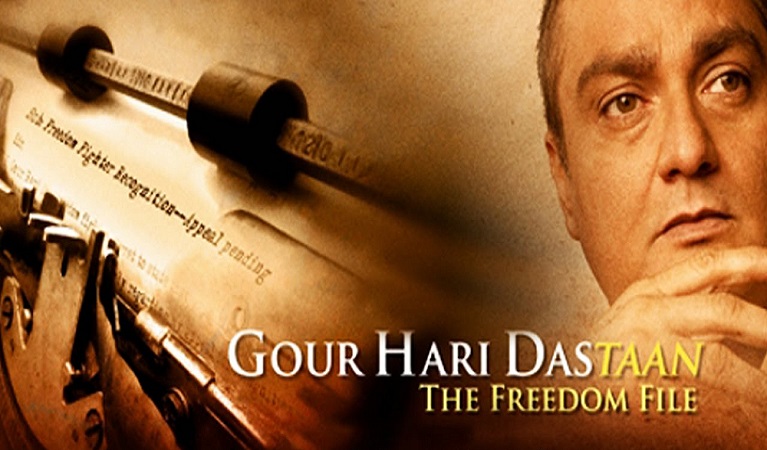 A biopic of an unknown Indian freedom fighter, "Gour Hari Dastaan" is an inspirational tale of patience and perseverance in a corrupt society. The film highlights the eroding value system in democratic India.

It is the ironic journey of Gour Hari Das. As a young boy and a part of the 'Vanar Sena' in Balasore, Orissa, he fought the British. In the later years of his life, when his son refuses to accept that he was a freedom fighter, Gour Hari Das obsessively pursues the Tamra Patra (freedom fighter's certificate) for 32 years to prove his point.

Narrated in a non-linear manner, the film is slow-paced and nuanced. What makes the film a cut above the rest is the realistic setting, the fine screenplay which is packed with symbolism and metaphors, the excellent sepia-tone cinematography and brilliant editing.

On the performance front, the film boasts of a melange of actors who are a powerhouse of talent.

Vinay Pathak in an author-backed role is convincing with his balding pate and restrained gait. He is consistent in his transition as far as his looks are concerned, but you can't relate to him as he lacks the charisma to evoke sympathy. His dialogue delivery like in most of his films, is flat and monotonous. You can't help but compare him to Anupam Kher in "Saaransh".

He is aptly supported by Ranvir Shorey as his journalist friend, Rajeev Singhal, who helps him in his endeavour. Rajeev is the only character that is well developed besides Gour Hari Das. That is probably because one of the screenwriters is a journalist himself. Shorey does justice to his character, but seems limited with his own shortcomings.

Konkona Sen Sharma as Gour Hari Das's supportive wife Lakshmi is perfunctory. She disappoints, especially in the scene where she confronts the society members and chases them away from her house.

The talented Tannishtha Chatterjee as Rajeev Singhal's colleague Anita, renders what the script demands of her, but is definitely not extraordinary.

Vikram Gokhale as the chief minister, Vinay Apte as MLA Sudhakar Olwe, Bharat Dabholkar as his security guard, Neena Kulkarni as a bureaucrat, Mohan Kapoor and Achint Kaur are all wasted. They are stereotypical in their delivery and any actor could have essayed these roles.

It is Siddharth Jadhav as the pushy tout and Rajit Kapur as the no-nonsense lawyer Mohan Joshi, who leave a mark with their spontaneity.

On the writing front, the subject is treated with all seriousness and humour comes sporadically with situational punches in the dialogues like when Rajeev Singhal takes Gour Hari Das to a bar and cajoles him to drink saying, "Halaat to badal nahin sakte mood toh badal lo". It brings instant relief to the sombre passage.

As a director, Ananth Mahadevan is sincere in his approach. He portrays the subject with complete honesty. And it is this uprightness that makes the film a powerful and appealing saga.