View Profile
"Golmaal Returns" have been a great success. Did you expect it so soon?

Not really, when my whole team and I saw the film we knew its going to work because it is a   masala film, a comedy film. But it took such a great opening and from word of mouth the way it  spread and what we had expected in two-three and a half weeks that was made up just in a weekend, so that was not expected.


How "Golmaal Returns" turn to happen. Any reason for it like Golmaal was a huge success.

Yes. After "Golmaal" when all these sequels were, doing well like "Phir Hera Pheri", "Krissh" and "Lagey Raho Munnabhai" my producer just gave me a call and said, Let's make a sequel to "Golmaal" also. Then Mr. Yunus Sajawal came up with the story and that's how "Golmaal Returns" happened.


How you thought of roping in Shreyas Talpade? 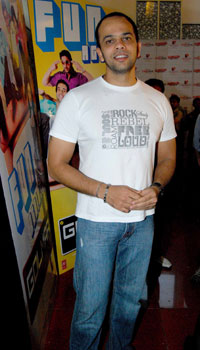 Actually Sharman was about to play that role but at that time he was shooting for "Dilli 6" and dates were clashing so we have take in Shreyas for the role.


Which actors are you planning to rope in for Golmaal 3?


Its known that Arshad Warsi will not be a part of "Golmaal 3"?

Ya, I don't know actually at that time I was angry, he gave a statement, and I retaliated on that. As I start writing, my anger seems to be getting pulled down by now . Let's see how it works.


You have so much success in comedy movies, so as a director, will you stick only to comedy genre or will switch to some other genres too?

I will love to do an "action" film but I am just waiting for right script to come. Action film is not about four action sequences. It needs a very strong story base. I am just dying to do an actions film.


What is that one thing that comes to your mind when I say Golmaal?


One movie that you want to be tagged as director Rohit Shetty.


Overall the movie is very nice was there any incident or particular shot that has become an unforgettable time while shooting?

We had great fun in making the whole film. So, when you do a slapstick thing then the whole  mood of the unit has to be that way. Then only you will be able to project it to the audience.


Message for all 'Golmaal' and 'Golmaal returns fans'

Thank you what else I can say.