Dill Mill Gayye stars have conquered the hearts of a million and among them is the spunky and popular Jennifer Winget who enthralled all as Dr. Riddhima. The girl who is also a much-in-demand host for reality shows is presently seen hosting the new reality show on Star Plus, Comedy Ka Maha Muqabla.

In a candid chat, Jennifer shares her experience being part of the show with a huge cast. 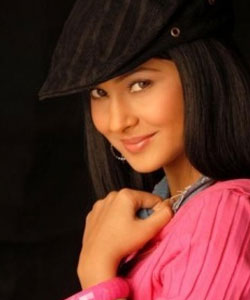 What made you take up this show?
I have always said and will always say that I love anchoring. As an anchor I don't have to play any character as I can be myself. There is also more room for me to directly connect with the audience and contestants which is lot of fun. I have already anchored a show before for Star which I enjoyed a lot.

What were your doing post Dill Mill Gayye?
I was getting bruised in Argentina after DMG and once I returned, I rested for 15 days after which I got a call for this show. God has been very kind and has kept me busy.

Are you  a favourite of Star?
I think you should ask this question to the channel. But I really owe them a lot as they gave me recognition. After that, it's been history. They gave me good projects  and they are like a family now for me. I don't  refuse  them because they always approached me with good projects that has only taken me higher and I am extremely honored for that.

Any plans of returning to fiction shows?
Things are never planned for me and if a shows interests me I will take it. Fiction and its rona-dhona is my home.

How was Zor Ka Jhatka experience?
All I can say is that it was a different experience and that was the reason I participated in the adventure show. Initially it was so much fun, but later on I realized that it's not my cup of tea. But even though I didn't do a good job, I got the experience of being in an adventurous show in which Shahrukh Khan was a part. What more can I ask!

The contestants with whom you became good friends in Argentina?
We all were there for work and at the end of the day I realized that I have my own friends. All of them were cool, but I can't name any one of them.

Any regretting moment in Argentina for taking up the show or things that made you cry?
I can never forget my first episode where I went with full of josh but after I missed the first jump and fell into the water I completely lost all the energy. And I felt I can't do the show, the tasks being so tough and also I didn't even complete my first round. I started crying.

It's a huge responsibility to be an anchor and that for a show that has such a huge cast?
I remember the first day of the show when I was very much nervous about how I am going to take up such a huge responsibility because anchor is the  person who binds the show together. But luckily all of them were so cooperative and understanding and though being great actors, they  have no edges and are so much at ease.  I had worked with Arshad earlier and the minute I saw him I was relieved and Raveena is amazing. They keep  giving you tips and it feels really nice where all are like one big team.

If given a chance whom would you like to co host Comedy Ka Maha Muqabla with?
Can I have Brad Pitt with me (laugh)

From TV  Industry?
Mantra and I did a fairly good job with him in Zara Nachke Dikha, and it was nice working with him

Any TV actor?
There are so many and I know who you are pointing out why don't you only say (smiles).

Do you feel any kind of pressure or restriction when audience wants to see Karan Singh Grover and you together?
Absolutely not, in fact I get overwhelmed with the response I got from Dill Mill Gayye. I was shocked to see that a character could be so close to the audience and I actually feel honored to get a lot of mails. What I realized is that they are young and take everything into their life and if you do good work, people will love and appreciate you.

Do you think in a show like Comedy Ka Maha Muqabla, you will get overshadowed by the huge cast?
There is no question of me getting overshadowed as we all are playing our roles. Judges are judging and I am anchoring; hence there is no competition. And comedy becomes good when there is a team effort and so nobody even tries to  overshadow anyone.

Any planning to get back to fiction or any new projects?
Nothing as of now and I don't plan anything as I take things as it come.

Your message to India-Forums?
Thank you for connecting me with my fans and keeping us updated with the television news. We hardly get time to watch TV, but because of you, we know what's  happening in the industry. Continue with what you are doing.

And what would you you like to tell your India-Forums fans?
I would like to thank every one from children to all the elderly ones for your love. Especially I would like to say to my young fans that if your exams are going on, all the best and if they are over, then enjoy your vacation. Have fun.

Jennifer Singh Grover stay like that for rest of your life.stay blessed with KSG

avi_k_ 8 years ago Love you a lot. Waiting for ur marriage on 9th april with karan singh grover. Kajen will rock in real life too.

alexadragutza63 9 years ago Y love you so much KARAN! YoUaRe The best in the WORLD!