This is the story of Gym and Jill, the two main characters in the film, who come tumbling down. Watch 'Go' and you will agree producer Ram Gopal Varma's Factory needs to be shut down for serious overhauling.

And this is despite the fact that this story of Gym (newcomer Gautam) and Jill (Nisha) has some peppy and perky moments. In fact debutante director Manish Srivastava pumps up the adrenaline real hard in this rowdy road movie.

But overall, the movie is a maddening mix of guns and songs. Unlike 'Daud' and 'Road', Varma's earlier two road movies, 'Go' has no star value. It has a pair of lovers who talk in terrible, tongue-twisting riddles and squirmy one-liners. 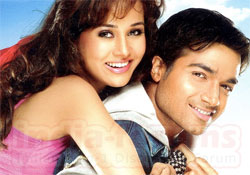 Featured Video
The lovebirds squabble incessantly while Kay Kay Menon, playing a dour cop, often stands around watching the couple with the look of a man who has just encountered an unpleasant smell.

Don't blame Kay Kay. The odour comes from Ramu over-doing the gangster-politicians-cops theme. His supporting cast, which includes Ravi Kale, Govind Namdeo and Rasika Joshi, has become so predictably inter-changeable, you wonder where Ramu is heading with his cinema.

Muscle-boy Gym snorts drugs in a club, womanises to tease his neighbour-lover and barges into her bedroom in his underwear, while her mother (Rasika Joshi) goes into a swoon.

If you haven't already fainted at the brain-dead antics of Gym and Jill, there's more. The squabbling neighbours and their much-in-love children is borrowed from K. Balachander's 'Ek Duje Ke Liye'. Nisha's character is even named Vasu after Kamal Haasan in Balachander's film.

Everyone in the film seems to be in the mood for some on-the-job fun. Only Rajpal Yadav, doing a series of demented take-offs, actually makes you laugh even as you wince at the sheer absurdity and stupidity of the goings-on.

While love songs come on intermittently in the first-half, the second-half is more chase-friendly with our couple fleeing to Goa singing, fighting and laughing while a man dies in the backseat of their car!

Insensitivity isn't just a brutal reality of the world that Ram Gopal Varma has so diligently built since 'Satya'. He has now extended it to his audiences as well. Does Varma really think audiences will tolerate this mix 'n' match masquerade of mayhem and mirth?