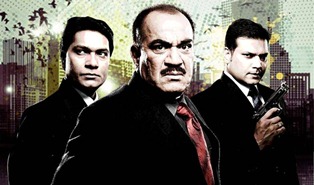 Get ready to witness some extra dose of action and drama as your favorite crime show CID turns tri weekly starting tonight April 11, Friday - Sunday 10pm. Watch the extra ordinary and special Giraftaar series this week where all the cops have targeted some of the unknown criminals. These well efficient cops are tracing them out one by one and killing them. In the upcoming episode, a 35 year old woman calls ACP to a cafe and accuses him in public for destroying her life and holds him responsible for her husband's death.

Meanwhile ACP sends Abhijeet to pick up one of the undercover cops, but someone manages to kill the cop before Abhijeet can nab him and also kidnaps Abhijeet. On the other hand, Dr. Salunke shocks everyone and informs that the forensic report from Crime scene shows that Daya has been shot. Furthermore, Salunke reveals that the bullet from Daya's body shows that it has been fired from Abhijit's gun.

Why is Abhijeet absconding? Has he really shot Daya? And who is after the CID?

pinkpearl5 6 years ago Thanks for the article! :) please keep giving more! Let's see how it turns out :P

Veena.. 6 years ago Trio are the best, I hope series will be an intresting one