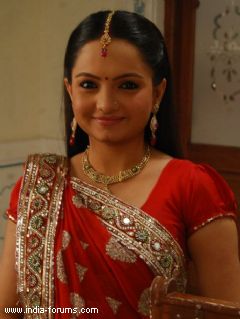 Giaa Manek, who is portraying the character of sweet and simple Gopi Bahu in Star Plus popular daily series Saath Nibhana Saathiya has been replaced in the show. Fans are aware that Giaa is one of the contestants in the much awaited dance reality show Jhalak Dikhhla Jaa 5 - Dancing with the stars , which is scheduled to be aired from 16th June onwards on Colors

There was news of channel war being waged as the actors were not being allowed to take part in Jhalak Dikhla Jaa. But, Giaa Manek has made her choice and wishes to concentrate on her dance performances in Jhalak.

Tellybuzz spoke to Giaa but she refused to comment on anything - ' I will be holding a press conference tomorrow at 12pm. Please address your questions there."

Star Plus issued a statement saying-"Starting tomorrow, June 7th, one of STAR Plus' longest running shows, 'Saath Nibhana Saathiya' will see a new face essaying the role of 'Gopi Bahu', the lead protagonists of the show; which has been played by Giaa Manek since its launch. The association with Giaa Manek has however been discontinued with immediate effect, due to unprofessional conduct and breach of contract from the actor's side. "

We also hear that the channel has already started shooting with a new face, who will be seen essaying the character of Gopi Bahu in Saath Nibhana Saathiya. The tentative name doing the rounds is Devoleena Bhattacharjee who was last scene in Preeto.

Devoleena's co-star, Kajal Pisal on her stint in 'Bigg Boss 14'

+ 2
4 years ago The original' Gopi bahu is BACK! Giaa
Manek to make a comeback in Saath
Nibhana Saathiya'

Here's a good news for
all Giaa Manek fans! The bubbly actress,
who became an overnight star with the
portrayal of her innocent Gopi bahu role
in popular show Saath Nibhana Saathiya,
is set to make a comeback on the show.
According to a report published in
SpotboyE, buzz is that Giaa and producer
Rashmi Sharma, who had a major fallout,
are keen to bury the hatchet. [BR The actress, who
had originally played Gopi Bahu in Saath
Nibhana Saathiya, is all set to return to
the Star Plus show after a gap of four
years. However, there is no clarity on
whether she will reclaim Gopi's role. The
actress quit the show in 2012 on a very
bitter note. She had a major fallout with
producer Rashmi Sharma after
participating in Colors' dance reality
show Jhalak Dikhhla Jaa and was
replaced overnight by Devoleena
Chatterjee, the current Gopi bahu! Saath
Nibhaana Saathiya's Gopi Shakes A Leg
With Diya Aur Baati Hum's Sandhya
[Inside Video] A source close to the show
reveals that: "The track shows Gopi
becoming a nani, but Devoleena has
threatened to leave the show if there is a
leap. That's when Rashmi decided to get
Giaa on board. Even if Devoleena agrees
to play Gopi post the leap, Giaa might be
given another role.

8 years ago Gia, please come back in Saathiya...We miss you the most.

vijji123 8 years ago We cont see new face in role of gopi,giaa is correct for that role.

8 years ago saw the new gopi bahu while changing channels and am sorely disapointed. gia manek had an innocent vibe to her which is so missing in th new girl. she looks like deer in headlights

8 years ago without gia i am ont even imagine sns . only gia can do that character no one suit like gopi . pls we want gia back i already stop watching that show if gia will come then only i will watch that show

8 years ago Bring Giaa back as Gopi, no one replace her. the twinkle in her eye when she sees Ahem, the innocent face. Please bring Giaa back

+ 3
8 years ago if she respected gopi fans she wouldn't have abandoned sns for a dance show...stop whining , if she doesn't care why should you? just think about it.
Itll affect this show for sure...
But how is star plus affected by this? it is not a bad move or anything for star plus, it has always produced popular daily soaps and gets top trp most of the time.And 3 years? oh please! serials like kasauti ran for 9 years.

Anesh 8 years ago that role only suits Gia.. the new girls does not at all fill the character of gopi...now I dont feel like watching the show at all...

8 years ago I want Giaa as Gopi back..The TRP is sooo going to fall just like (example) when shilpa left TRP falled sooo much!Exactly...better to close it of gia's not here!