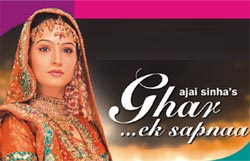 Sahara One's one of the long running shows, Ghar Ek Sapnaa, produced by Ananda Telefilms is the next to bite the dust, after we reported about Kismat Connection winding up.

According to our source, "The present track focuses on the confusion caused in the family owing to Kakul's look-alike Damini being in the house. Slowly the track will proceed towards the real Kakul (Anisha Kapoor) getting back into consciousness. This will eventually pave way for a logical conclusion of the show".

"The creative team is busy working on the script for the final track. The shooting for the show is most likely to end around the 20th of August, and the last episode will be aired around the 12th of September", adds our source.

umeali 13 years ago nooo. this cant happen. i have watched this show from beginning at now its finishing. why

+ 3
13 years ago I used to watch this show when it first started like probably 2 and a half years ago...
It was nice

+ 4
13 years ago No this cannot happen. I love watching this show. Plz dont do this.