View Profile
Actor Aamir Khan always comes up with some new element in his films. So, how come his upcoming flick 'Ghajini' be an exception.Looking at the movie promos one can make it out that 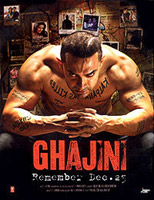 Featured Video
he is all set to rock. Also he is taking a keen interest with every single aspect of the film.


This must be the reason that he asked the producers of the film to shoot a song especially in South Africa. Aamir personally searched a location to shoot this 4 minute song.


Recently Aamir went to South Africa for shooting. During the shoot of an action sequence he hurted himself badly and got his leg injured. Injured Khan has to left the shoot in between and with this even the song left unshot.

But as he got himself into shape, he asked the producers to get the song shot particularly in South Africa instead of somewhere else.


However,producers were not pleased by Aamir's idea because of the insecurity that this may hamper the budget of the film. But,lastly they agreed upon.

Surprising thing is the unit members who went to South Africa in a Charter plane had no idea about the location till they reached there and even after the shooting they were asked not to divulge anything.