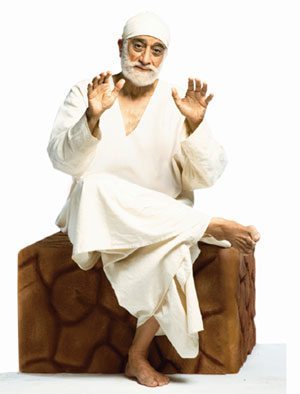 Our Telly Buzz Reporter caught on with the Producer of the show, Aushim Khetarpal who adds, “This serial on Shirdi Sai Baba is not a celebrity show, but a show with celebrity experiences. The serial will show the real life experience of Ismail Darbar, Ravindra Jain and few politicians too. The popularity in Baba has increased a lot in these few years and today, we can see people of varying age groups, being a devotee of Baba. We are working on a Video Album to promote the show, Alka Yagnik and Ravindra Jain have lent their voices for this album. In addition to Sai Baba, we are resuming the next season of Man Main Hai Vishwass from this Sunday.”

The Sai Baba of the show, Sudhir Dalvi commented, “Sai for me means ‘Sakshat Ishwar’. This show is no dramatization, but it speaks of real life experiences which will strike a chord with the viewers. I have been lucky to have played this role thrice before – in a Marathi film followed by one in Hindi and a show earlier.. Sai Baba’s message has always been, “I don’t do Miracles, they just Happen”.

Deepak Nagre, the grandson of a Sai devotee brought along with him, a 100 year old kurta of Sai Baba. Deepak Nagra quotes, “My grandfather who was a Nawaab, had this kurta of Baba with him , this was off-white in colour, but now its turned into Mehendi Green and is a little worn out”.

To talk of real life experiences, our reporter talked to an ardent devotee of Baba, Shantilal Panchaliji. This is his touching experience in his own words, “There was a girl who met with an accident in Mumbai. Her news caught the eyes of one and all as it was the Headlines in all local papers. Even I had read the news. On the fourth day of the accident, I got a dream where Sai Baba told me that I had to make the girl listen to the songs of Baba I had recorded in a cassette. After 17 days of constant hearing, the girl woke up one morning saying, “Om Sai Ram”.  Well, this is just the beginning, as we will get to see many emotional real-life episodes in this show.

With this, we come to an end of the Happenings on the Launch Visit  of the Serial ‘Sai Baba. Stay tuned to Sony entertainment Television – as your Sundays will never be the same!!

15 years ago I really hope someone begins posting this serial. I am a great believer of Baba and would love to see it.