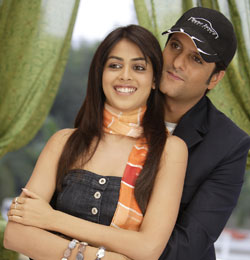 Featured Video
for falling in love with her hit flick, Jaane Tu Ya Jaane Na and the popular character, Pappu. We all loved him but she's taken her fondness to the next level.

For her upcoming release, Life Partner, she had her co-star Fardeen Khan do the popular dance step from the Pappu Can't Dance Saala song, because she felt it was lucky!

The move has been incorporated by choreographers Bosco-Caesar in the Teri Meri Zindagi number from Life Partner, which is playing on television these days!