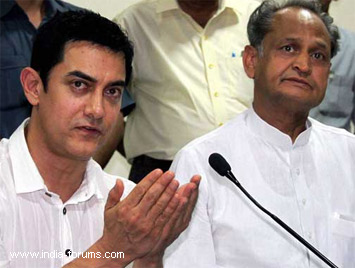 Rajasthan Chief Minister Ashok Gehlot Wednesday assured actor Aamir Khan, whose TV show "Satyamev Jayate" on female foeticide has created a storm, that he will take up the issue of a fast track court with the state chief justice so that justice was expedited.

Addressing the media with Aamir by his side, Gehlot said the widely lauded show had brought reality to the forefront.

"I am moved by Aamir's programme and his gesture. I will definitely take up the issue and speak to the chief justice of Rajasthan to find a way," he said.

In his show, Aamir highlighted the story of a sting operation done seven years back by two Jaipur journalists to expose increasing female foeticide cases in Madhya Pradesh, Gujarat, Rajasthan and Uttar Pradesh.

The sting by Meena Sharma and Shripal Shaktawat had covered 140 doctors involved in sex determination tests and abortions. None of the doctors has been penalized.

Aamir had said in his show that he would appeal to the Rajasthan chief minister to get the cases against the erring doctors clubbed together and try them in a fast track court.

He also urged the viewers to support his signature campaign.

Gehlot said after the show, he met senior health and medical officials to know more about the extent of the problem. "We are doing a lot of work towards the issue.

"There is a certain judicial process (involved) to club together cases for trial in a fast track court."

Aamir said he had made "a specific request to the chief minister that all cases related to the show" be decided at the earliest.

The star said he was hopeful that his debut TV show, telecast on Doordarshan and Star Plus, would "touch people's hearts".

"I am not an activist. I am an entertainer who tries to touch upon the feelings of people. I will take up 13 more issues in the upcoming episodes," he said.

"Wherever such incidents occur, we will go," he told reporters.

"I was expecting to touch people's heart with the show, and I am glad to see the effect of the show. I am happy about it.

"I am not here to talk about issues seven days a week.. I am an entertainer, and that is what I am passionate about.

"I want to touch people's emotions and know their feelings, whether it is through a film like 'Dhoom 3' or through this show.

"As an entertainer, it is not necessary that I only make people laugh, it means that I should be able to evoke all emotions in them."

lubbu 8 years ago AMIR sir u rock!!! amazing Masha ALLAH!!! LOVE u more!!!!! InshaAllah hope for the best n the right results!
The show is super amazing! jus made me cry! gosh! hats off!!!! &lt;3

bips 8 years ago Mr. Gehlot. THIS is supposed to be a part of your duty, part of the constitution you promised to uphold. That you need an actor to remind you of your "kartavya" is shameful to say the least

SonarMeye 8 years ago My thousand salutes goes to Aamir Khan - he is a gem against the world of Indian commercial entertainment business. All his last projects has a social message & a protest against the injustice. Now this programme is the jewel in the crown. He not only was brave enough to bring this important brutal issue on the forefront, he managed to convince & compel the appropriate authorities to wake up & promise some actions. I hope Aamir Khan will see the fulfillment of the Chief Minster's promise. As we know the politials are always ready to give false promises. The sensible population are with Aamir 100%. God bless Aamir Khan & his efforts for the betterment of the society & his efforts to eliviate injustice. Thank you Aamir Khan on the behalf of all the girls of the world.

cimba 8 years ago i am so thankful to the media , who brought attention to much needed subject. go girls and girl power.
i am not a feminist but hate the way girl is so unwanted.

Sea-Hawk 8 years ago AAMIR KHAN my respect for u is increasing like anything.. really this man has a big heart n guts to take d 1st step for something big... Indian piliticians plzzz take a lesson from him.. AAMIR SIR u r d best .. love u

49erFan 8 years ago I totally love this man, wow what victory for him!

Silentsoul 8 years ago Thanks for AAMir effort..atleast little happneend But SHAME on INDIAN poltician...there are reporters fighting for it for 7 years nothing happened...and AAMir said He came...seriously we need celebrity for even dire social issues...

Nihira-fan 8 years ago Satyamev jayate is brilliant show...Really Hats off to Aami khan and his team!!!