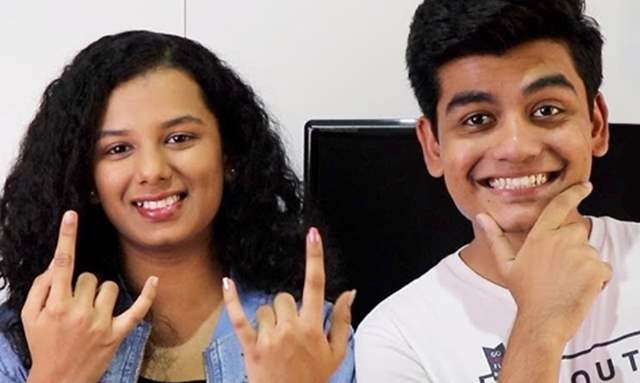 Two supremely talented 22-year-olds: Gautami Kawale and Abhyudaya Mohan have taken the Youtube platform by storm. The duo has a Youtube channel by the name ‘Slayy Point’ with more than 1 million subscribers. Their videos are a rage amongst teenagers and the duo is highly liked by their fans for their comic content.

We got in touch with Gautami and Abhyudaya for an exclusive conversation, where they talked about their Youtube journey and the difficulties they faced through their road to success. While Slayy Point is a popular channel today with a massive following, it was not a smooth ride for the duo as they are still in college and had to manage both at the same time.

Talking about the challenges they faced, Gautami says: “We had a lot of speed breakers in terms of choosing between studies and Youtube, that was always a big decision. We wanted to do both obviously but there are only 24 hours in a day and we were doing our Bachelor's degree but by the end of the third year, things got serious. I had taken psychology so I had extra lectures, practicals and many other projects. Teachers were also very particular about attendance. Abhyudaya’s college is also very particular in terms of attendance, so we had to attend college everyday. But we had to still come back and make videos. We had to manage videos in between final exams, that was a task. Even parents were more adamant about us getting a degree because the Internet can be an unstable place so there was some resistance from their end as well. So convincing them was also difficult.”

Abhyudaya adds: “Especially when you’re making videos along with attending college and the video does not do good, then that definitely affects you. You cannot even focus on studies, all the hate comments keep coming to your mind. So managing both at the same time and keeping a mental stability was the toughest part.”

When asked about how they deal with hate comments, Abhyudaya says “It took us a long time but we realised that no matter what we do, we will always get hate comments. Even if we make the best video ever or the funniest video ever, there will be someone who will not like it or not find it funny. So when you stop taking the burden of pleasing everybody, you stop being so hard on yourself and hate comments will not affect you. It’s good to not take hate comments seriously.”

Gautami concludes by saying: “In the end, we make the videos for entertainment and if it fails to entertain a few people, it’s alright.”

Check out the full interview here:

Sidharth Shukla Opens up on Online Trolling, dealing with Negativity & ...

'I Know the Struggles You have Gone Through': Varun Dhawan's Heartfelt ...

Dakota Johnson On Dealing With Depression Ever Since She Was A ...

Vineet Raina Points out the Financial Struggles of an Artist during ...