Abeer that's Gaurav Khanna performing the role of a son from a Brahmin family in the COLORS on-going serial 'Yeh Pyaar Na Hoga Kam', has been viewed till date as a guy fighting to change the thoughts of his orthodox family, and at times expressing secret love to his neighborhood girl Leher (Yami Gautam) tagged as Kayasth's ladki. The actor will now be seen enacting a scene where he is drunk. 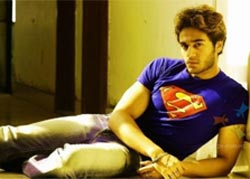 So when we conversed with Abeer to know more about his experience shooting for this scene, the first thing he reciprocated was, "I'm just a social drinker, and as I don't socialize much, my capacity is just that of a peg or even less at times".

He also conveyed that due to the above reasons he was quite skeptical performing this scene, and so was also given the elective to have a peg before the shoot to get into the mood of a drunkard. But Gaurav Khanna preferred to trust his acting instincts than the peg and dared to give the shot without even smelling liquor. When asked he stated, "Acting is something that comes from within and is not dependent on any substitutes to give it the feel of reality".

Though this scene was shot four to five days back, it had been enacted so well by Gaurav that he not only received endless applause on the day of the shoot, but has still been receiving acknowledgment calls from people of different departments of the show, including the technicians. Gaurav now hopes that he receives an appreciation of equal magnitude from the viewers too.

Before signing off, Gaurav conveyed a social message to the viewers, "Please don't drink and drive".

GauravsDbest 9 years ago Oh i loved the scene to the core!Love Gaurav, love YPNHK!GK ur the best!

Sid4Sidney 10 years ago Amazing actor, GK and wholeheartedly you really deserve many awards. (i would love to see you coming on stage again and again to receive so many)

sam. 10 years ago U r just so perfect as abeer:)and yami compliments u perfectly as leher!

Eksie 10 years ago Gaurav .. one after the other you're giving us mindblowing spellbinding performances!

Congratulations on playing Abeer .. sooo perfectly! You deserve nothing less than the Best Actor Award!! I pray its yours this year!!

bewitched21 10 years ago u are a superb actor. miss prithvi alooooooot!!!! love you

Soha19 10 years ago Yeh, so true Ekta. I wish for him also, He truly deserves it.

Eksie 10 years ago I wish and pray Gaurav wins an award for his performance this year .. He soooo deserves it!! Just this act is proof of his brilliance and versatility!

Anee00 10 years ago You are awesome GK, and every scene you do is such like coming from a true perfectionist

From Sid, Bunny to Ved, Barfi: Life Lessons that Ranbir ...
37 minutes ago