View Profile
Deven Bhojani's portrayal of Gattu in Star Plus and Hats Off Productions' most popular show Baa Bahu Aur Baby has always remained close to everyone's hearts. But now the love of the audience for Gattu is declared as official with him being voted the 'Most Loved Character' in a recent research conducted on the popularity of the cast of the show!! 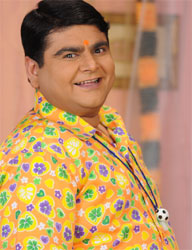 Featured Video
The actor says, "It's truly an honor. In my career I have portrayed many characters but its Gattu who got me more of recognition and love. I hope I can continue to entertain the audience as Gattu for many more years to come."

The show will open with an interesting return of  the adorable Thakkar  family to an all new and renovated Krishna villa. Falling in love with their own refurbished home, this eccentric family will be celebrating doubly as Baby's fiance Birju will go on to declare about his mother's wish to fix his and Baby's marriage date.

With this, Gattu bhai aka Deven gets a 'pseudo' new look too. He says, "Well there's not much of a makeover for me. But it's just that from now on Gattu will be wearing this shiny new whistle around his neck all the time. And if anyone inquires about it, Gattu will say - (picks up the whistle and blows first) Aise hi (just like that) time pass."

Tune in to be entertained all over again by the famous Thakkar family this Sunday, 23rd August  at 8 PM every Saturday and Sunday on Star Plus.

13 years ago although i had wished, leela and praveena bhabhi the original be back, i am happy that baa bahu aur baby is back

13 years ago M so so happy and delighted to have this show back! Its a breath of fresh air from the same gisapita shows u find on everyday!!!!!!!!!!

13 years ago Well deserved recongnition for Gattu!!! He is my favourite character in the serial and Devan does it wih so ease and comfort that sometimes I feel like Devan is excatly like Gattu on real life!!!

+ 5
13 years ago whoa!congratulations to him.
No doubt Gattu bhai is an all time fav character for all=))