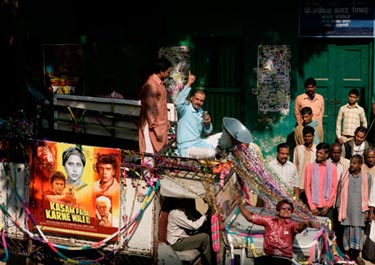 The audiences have given the thumbs up to Anurag Kashyap's 'Gangs Of Wasseypur'. It has opened to full houses in Bihar, Uttar Pradesh and Jharkhand and is also drawing crowds in multiplexes in the Metros, distributors say.

Prashant Kumar Singh, owner of Puja Talkies in Dhanbad, Jharkhand, told IANS: ''Gangs of Wasseypur' has opened very well with 80 to 85 percent occupancy. Some of the shows were even houseful. The film is going great and even the advance booking is going on full swing.'

Bihar-based Brijesh Tandon of HK Tandon and Company said that 'Gangs Of Wasseypur' 'has opened very well in Delhi, Uttar Pradesh and Bihar. It is around 80 percent occupancy.'

Written by Zeishan Quadri, who hails from Wasseypur, known for the bloody rivalry between gangster Faheem Khan and businessman Sabir Alam over scrap business, the film is described as a cinematic offering that has hurled audiences right into the notorious anarchy of the North Indian small-town where the barrel of the gun speaks an irresistible language of mayhem by a reviewer.

Directed by Kashyap, it has too much of gore and blood and it is believed that violence on this level has never really been a part of mainstream Hindi cinema before.

Despite that the audiences are thronging the cinema hall to see this blood saga.

Delhi-base distributor Sanjay Ghai said: ' 'Gangs Of Wasseypur' has opened with 70 to 80 percent opening in both single screens and multiplex in Delhi and is going great.'

In Mumbai, the response was slow but, according to distributor Rajesh Thadani of Multimedia Combine, ''Gangs of Wasseypur' opened with 20 to 25 percent in Mumbai. But it has started improving from the evening shows and would pick up in the night and at the weekend.'

Manoj Gupta of Viacom 18 said: 'In Varanasi, the opening was around 70 to 80 percent but the afternoon shows went houseful in Lucknow, Gorakhpur among others. Even the multiplex shows of 'Gangs...' are houseful.'

Kashyap, who co-produced the film with Sunil Bohra, has said that it is his most expensive film and he reportedly had to spend Rs.15 crore on paying the actors.

Manoj Bajpayee, Nawazuddin Siddiqui, Richa Chadha, Huma Quershi, Reema Sen and Piyush Mishra's have stepped into thier roles convincingly and their powerful performances have made this real life-based story into a compelling cinema and it is wooing audiences in Kolkata too.

' 'Gangs Of Wasseypur' has opened with 45 to 50 percent occupancy in Kolkata and is getting better with the evening shows,' said Moni Venkatesh of Shri Venkatesh Films.