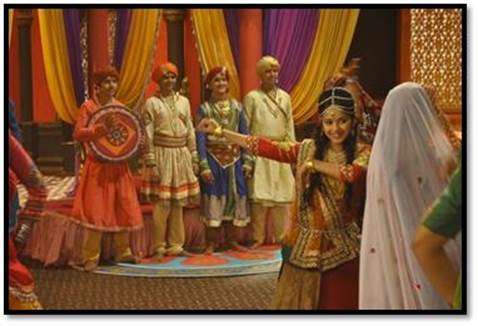 It was fun and frolic for the cast of Sony Entertainment Television's Bharat Ka Veer Putra- Maharana Pratap when they swayed to the traditional Rajputana tunes in a recent dance sequence.

A little birdie from the sets informed us that while rehearsing for the dance sequence young prince Pratap aka Faisal I Khan and his friend Chakpraani aka Yash were leaving no stone unturned in matching their dance steps. While on the other hand the two besties, Ajabde (Roshni Walia) aka Roshni and Phool aka Jannat Zubair Rahmani got their steps right in no time. That's not all; the girl's teams were also up to some mischief as they choreographed some new garba steps using the drum sticks! Looking at their excitement, Pratap and his gang couldn't stop themselves from joining them and in no time the set turned into an impromptu dance floor.

Commenting on the same, a thrilled Phool played by Jannat said, "We were very excited for this special dance sequence and were really looking forward for it. Dancing is fun and the best part of the sequence was that I got an opportunity to get dressed up in the ravishing princess attire and beautiful jewelry."

Well it seems these young ones truly know how to make work a fun place!

KratikaTheDiva. 6 years ago Roshni rocks all the way :)

_NeverMind_ 6 years ago Thanks for tagging roshni walia TB !!!!!

-FreeLancer- 6 years ago OMG :) Finally:) thank u TB for Tagging Roshni Walia :) and please remember to tag her in the upcoming articles as well:) Pankhu tere thread ka kamaal hai :)

Ohhh 6 years ago Thanks Telly buzz for tagging Roshni Walia please tag her in the other article too.

KratikaTheDiva. 6 years ago Yay finally roshni is tagged . thank you so much mods :)

..Pankhudi.. 6 years ago Roshni Walia is the Female lead of Maharana Pratap please tag her in this article !!

I don't understand what is your problem she is the main female lead and deserve to be tagged her !