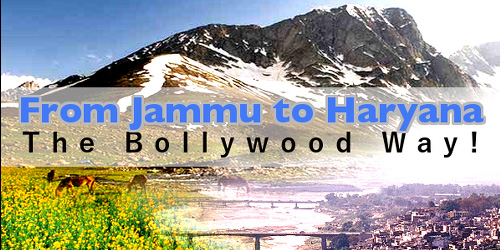 Focusing on the four different corners of the subcontinent and their influence in India, we now head over to the North and discuss its influence on Bollywood. For the uninitiated, some of the most prominent states in the North of India include the likes of Rajasthan, Haryana, Jammu and Kashmir, and Punjab.
Rajasthan, with its picturesque locales and rich heritage, is a region that is often explored in Bollywood. One of the most famous Rajasthani influences that is remembered by all and sundry is the famous Madhuri Dixit Nene number "Choli ke Peeche Kya Hai" (Khalnayak, 1993). Be it in the form of the Marwari and Rajput culture, as seen in Rajshri Productions' Isi Life Mein (2011), or the use of the magnificent palaces of Jaipur and Udaipur, such as those in films like Khoobsurat (2014) and Yeh Jawaani Hai Deewani (2013), Bollywood has had a long standing relationship with the dry arid desert region. Most recently, the Sunny Leone and Jay Bhanushali starrer Ek Paheli Leela had references to the region, and Leone actually had dialogues in the regional Marwari dialect.
Before Yash Chopra introduced the breathtaking Switzerland to Bollywood, Kashmir was the go to location for most of the song and dance numbers with scenic backgrounds. Despite filmmakers now exploring foreign locales like Switzerland and Jordan for their shoots, one can't deny that Kashmir is still a favorite among Bollywood directors. Be it with Shammi Kapoor's Kashmir Ki Kali (1964) or Ranbir Kapoor's Rockstar (2011), the culture and locations have been beautifully depicted in the industry. Interestingly, Nargis Fakhri's character's wedding in Rockstar was the first ever Kashmiri Pandit wedding ceremony shown on the silver screen. Given Kashmir's political condition, however, there are filmmakers who're not painting the state in its previous glory, but also bringing out its harsh realities for the world to see. Onir, in his film I Am (2011), for instance, told the story of a young Kashmiri Pandit woman (essayed by Juhi Chawla), who goes back to find her state in shambles, something that prompts her to introspect about her life and triggers a series of events in that section of the film.
A region which has been typecast by Bollywood and its filmmakers, and wrongly so, is Haryana. Admittedly, the region does suffer from various socio-cultural issues, but it appears as if most of our films only try and highlight how rural and violent the people are. Be it in both parts of the Gangs of Wasseypur series (2012) or Anushka Sharma's recent film NH10, for instance, the general impression of Haryana in the minds of the audience is that of loud, foul mouthed and violent individuals, who're out to kill anyone who breaches the law. This being said, movies like Tanu Weds Manu (2011) and the more recent Tanu Weds Manu - Returns do bring out the lighter side of the culture.
It appears as if Bollywood is obsessed with Punjab and the fun-loving, jovial and sociable people of Punjab, and it won't be long when this obsession becomes rather unhealthy. There are numerous movies set in Punjab, or focus on a Punjabi family, have characters who are Punjabi and speak the language, and some of them, despite not having any connection to Punjab, have songs in Punjabi or songs about the culture! In Hasee Toh Phasee (2014), for instance, the characters have no connection to Punjab, yet, the Gujarati Meeta (Parineeti Chopra) sings a "Punjabi Wedding Song" for the Lucknow bred Nikhil Bharadwaj (Sidharth Malhotra). One of Bollywood's favorite mother, Kirron Kher, is known for playing a loud Punjabi mother in almost every film she stars in, so much so, that a Punjabi mother is automatically associated with Kher, even though you do have the occasional Amrita Singh essaying similar roles. Bollywood's obsession with Punjab and their culture is so pronounced, that most of the characters in the films are shown to be Punjabi, or have a Punjabi heritage, whether or not this is even necessary. Be it the demure Naina Catherine Kapur (Preity Zinta) in Kal Ho Naa Ho (2004), the outspoken Shruti Kakkar (Anushka Sharma) in Band Baaja Baaraat (2010), or the charming and suave Kabir Mehra (Ranveer Singh) in the recently released Dil Dhadakne Do, the one thing that all these characters have in common is that they belong to Punjabi families.
Possibly one of the most explored parts of India in Bollywood, the North Indian region has had a strong influence in Bollywood, and will continue to do so in the years to come. Which is your favorite movie with a strong North Indian influence? Comment below and let us know!