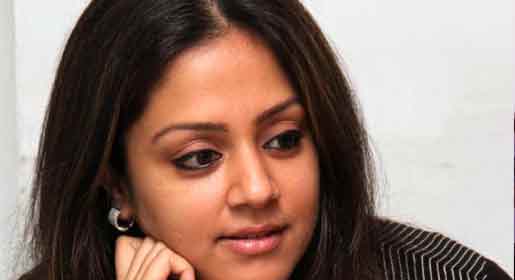 Making a comeback after eight years to Tamil filmdom with upcoming drama "36 Vayadhinile", actress Jyotika says it was at the behest of her best friends and her actor-husband Suriya, she decided to don the greasepaint again.

"I was confused when I got the offer to act again. When I consulted with my best friends Sarah, Anu and Lakshmi, they said I should do it because I deserve a break. They were my driving force behind my decision to act again," Jyotika told IANS.

Jo, as she's popularly referred to by her fans, said she couldn't have done it without their support.

"From time to time, they'd encourage me via calls and text messages. I should also thank my help Devi, with whom I entrusted my children and stepped out to act without having to worry. I couldn't have done it without their support," she said.

Jo feels extremely lucky to have been married to Suriya. The couple has two children.

"My in-laws never questioned my decision to act again. They could've asked me, but they didn't. My father-in-law would drop the kids at school and my mum-in-law would pack their lunches and look after them at home. I could concentrate on sets because they were looking after my children," she said.

Talking about Suriya, she said: "He was the first person I met when I came to Chennai many years ago. Since then he's been my pillar of strength. I'm so happy to have married hima.

Directed by Roshan Andrrews, the film is the official remake of Malayalam hit "How Old Are Youa. It's about who decides the expiry date of women's dreams.

"36 Vayadhinile" is produced by Suriya's home banner, 2D Entertainment, named after his children Dev and Diya.

Jo said she couldn't have asked for a better comeback.

"This is easily my career's best film. We complain that Tamil cinema rarely produces women-centric films. I think all that is going to change with my film. It's amazing on Roshan's part to debut in a new industry with a woman-centric film," she said.

Recalling the shooting experience, she says that there was lot of women empowerment even on the sets of the movie.

"Most of the technicians were accompanied by their wives on the sets. Our cinematographer Diwakar's wife assisted him. While shooting, they'd argue about light and other small things. Off the sets, you find them eating hot bhajiya in rain. They make a wonderful couple," she said.

The makers of the film, 2D Entertainment have teamed up with Sakthi Masala to plan and help ten women realise their dreams.

"36 Vayadhinile" is gearing up for release in May. The film also features Rahman, Abhirami, Delhi Ganesh and Siddhartha Basu in important roles.

Courteney Cox gives a teaser of what to expect from 'Friends Reunion' ...

Jennifer Lopez & Alex Rodriguez officially call of engagement; 'we are ...