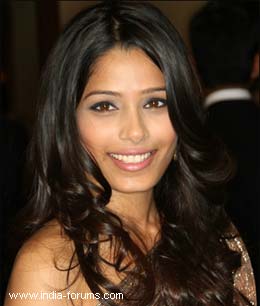 New Delhi, Oct 20 Actress Freida Pinto is strengthening her foothold in the international world. If rumours are to be believed, the 'Slumdog Milllionaire' star has inked a two-year endorsement deal with a high fashion apparel brand for $7 million.

'Since it is a two year deal, it makes it a $7 million deal. In Indian rupees, it comes out to be approximately Rs.35 crore. It is higher than what any Indian female celebrity has ever been paid,' said a source close to the 27-year-old Indian model-turned-actress.

When contacted, Anirban Das Blah, managing director, KWAN, the agency that handles Freida's endorsements in India, told IANS: 'It's a policy never to comment on brand deals. We've witnessed Freida's phenomenal growth in such a short span, and that too on a global platform. Brand Freida stands for very rare, unique and irreplaceable values and imagery, making her the ideal choice for a brand with a global appeal and an Indian focus.'

Freida made it big internationally post her appearance in Danny Boyle's Oscar-winning film 'Slumdog Millionaire'. Thereafter, she featured in films like 'You Will Meet a Tall Dark Stranger' and 'Rise of the Planet of the Apes'.

She will soon be seen playing the Oracle priestess Phaedra in Tarsem Singh's 'Immortals', which will release Nov 11. Her other upcoming projects include Jean Jacques Annaud's 'Black Gold' and Michael Winterbottom's 'Trishna'.

Among her favourite exercises are indoor skipping and cycling. She also makes it a point to start her day with a glass of warm water with some lemon and honey.

'Raveena has become a fitness enthusiast and makes sure to stick to a regular, disciplined workout regime. She keeps a watch on what she eats and yo-yo's between cycling, skipping or walking in spite of her professional commitments and being a hands-on mom,' said a source close to the actress.

Raveena is married to film distributor Anil Thadani and has two kids Rasha and Ranbir.

Actor Ranbir Kapoor has received the Brand Ambassador of the Year award at the Storyboard Consumer Awards organised by CNBC Awaaz.

'Brand endorsements provide a great additional avenue to reach out to audiences along with our films. I am thrilled to have associations that are in line with my personality and my beliefs,' Ranbir said in a statement.

The 29-year-old received the honour from Maharashtra Chief Minister Prithviraj Chavan while KWAN (the agency that represents Ranbir and looks after his endorsements) has been named the 'Agency of the Year' for the second year in a row.

Previous recipients of the Brand Ambassador of the Year award include Shah Rukh Khan, Akshay Kumar and Genelia D'Souza for different brands that they have promoted.