Today, BollyCurry takes this opportunity to mention another powerhouse of talent and a gem of a person who climbed up the tall ladder of success in mainstream Bollywood cinema. Yes, we are talking about none other than Neetu Singh. 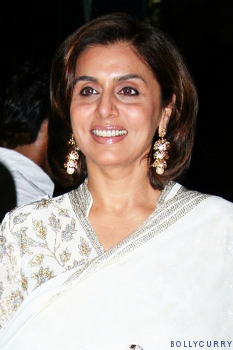 Singh was born on 8th July 1958 to a middle-class family in Delhi to Rajee Kaur and Darshan Singh. She soon moved to Mumbai and went to Hill Grange High School on Peddar Road. At the young age of eight, Singh made her big-screen debut as a child actor. Her most notable works as a child actor were her debut movie Dus Lakh (1966), Do Kaliyaan (1968), Waris (1969) and Pavitra Paapi (1970). After a short wait of two years, Singh was then casted as a leading lady for Rickshawala (1972). Unfortunately, the film didn't do well. But Yaadon Ki Baarat (1973) changed Singh's fortunes and gave her so much limelight that she was once again flooded with offers to play the main role in films. Her dance number "Lekar Hum" in Yaadon Ki Baarat won her rave reviews about her excellent dancing skills.

After acting with numerous top stars of the industry such as Shashi Kapoor, Amitabh Bachchan, Jeetendra and Shatrughan Sinha, Singh was on the peak of her career when she decided to get married to co-star Rishi Kapoor. This news came as a shock to many as Singh had just been nominated for a Filmfare Award for Best Supporting Actress for Kaala Patthar (1979). To the horror of many, she retired after Ganga Meri Maa (1983). Singh then shifted her focus to taking care of her family and raising her children Riddhima and Ranbir Kapoor. She is a proud grandmother to Samara, daughter of Riddhima and Bharat Sahni.

After a long break from the silver screen, Singh made her come back to acting after 26 years with Love Aaj Kal (2009). She then subsequently starred in Do Dooni Chaar (2010), Jab Tak Hai Jaan (2012) and Besharam (2013). She was also honored by Walk of the Stars as her hand print was preserved at the Bandra Bandstand in Mumbai.

DID YOU KNOW?
Neetu Singh is still a legendary actress to date and is loved by audiences. BollyCurry wishes her all the very best for her future ventures and hopes that she continues to entertain us for years to come.
Author: Nisha M.
Editors: Nabila S. and Gunia K.
Graphics: Shikha A. and Marsh P.
Have a suggestion or comment for BollyCurry? Drop us a PM at BC_Dropbox Today!