The big moment has arrived when Star Plus, the leading Hindi GEC celebrates its 10th anniversary of programming, with Star Parivaar Awards 2010. The awards this year is going to be bigger and better, as Star Plus salutes and recognizes artists and the creative team who work both in front and behind the camera... 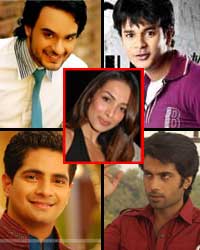 With such an enormous reason to celebrate, Star Parivaar Awards this year, promises to enthrall viewers with some gyrating and mesmerizing performances coming from the biggie actors of the channel!!

One such rocking performance will be when the four handsome hunks of Star Plus join the 'Chaiyya Chaiyya' girl Malaika Arora Khan on the dance floor!!

Yes, you heard it right, and the four lucky chaps happen to be Angad Hasija and Karan Mehra from Directors' Kut's Bidaai and Yeh Rishta Kya Kehlata hai respectively, Jai Soni from Sasural Genda Phool and Arhaan Behll from Pratigya. The four will be seen getting in sync with Malaika and matching her to the beats.

A little birdie tells us that the guys along with Malaika will be performing on the 'Ranjha Ranjha' number and 'Behnein De' number from the to be released movie, Raavan.

When contacted, Naitik aka Karan Mehra of Star Plus' Yeh Rishta Kya Kehlata Hai asserted, "Yes, we will be performing with Malaika, but as of now due to hectic shooting schedules we all are rehearsing individually; we have not yet got together to rehearse. Though I'm not in good health due to sleepless nights, yet I'm very optimistic about the performance".

When contacted, Ishaan aka Jai Soni of Sasural Genda Phool exclaimed, "I'm very excited to share the stage with the fabulous dancer Malaika. But I just hope that the audience would notice us at least for some time (smiles)."

We tried contacting Alekh aka Angad Hasija of Bidaai and Krishna aka Arhaan Behll of Pratigya, but they remained unavailable for comment.

Guess this is going to be the performance of a lifetime for the four handsome hunks of television!!

Zebi02 10 years ago ishan and alekh rocked the stage with malaika, they were the 2 best

SANARHAAN 10 years ago Waiting eagerly for SPA!!!! Arhaan must have done a gr8 job!

SANARHAAN 10 years ago Waiting eagerly for Spa to watch Arhaan!! Arhaan is da Best among all the four!

poppins 10 years ago oh no naitaik of all the ppl.... they cld hv taken kinshuk man!!!
karan mehra cnt evn gv proper xprsn wht is he gng to dance tht too wth malaika...

Miss_Random 10 years ago lol arhaan all the way, the rest of the 3 r just MAYB cute, but arhaan is a HOT HUNK

SANARHAAN 10 years ago waiting for spa eagerly to watch my Arhaan dancing!