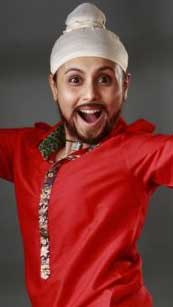 And she is back!


Rani Mukherjee, the popular face in Bollywood has been there, done it all- from blockbusters like 'Kuch Kuch Hota Hai' and 'Hum Tum', to a critically acclaimed banner like 'Black', even in side roles like the one she played in 'Veer Zaara' , the girl who rose to immortal fame with her Aati Kya Khandala number years ago has earned laurels in plenty.


The most recent of her projects -Tara Rum Pum, Laaga Chunri Mein Daag, Saawariya and Thoda Pyaar Thoda Magic- have not met the best of fate. There has been hushed talk in tinsel town anticipating whether, if, this lull in the the Bengali beauty's professional life could spell an impending? On the personal front, Rani who has remained a significant 'single' name in her years of peaking fame, being linked to the already married Aditya Chopra and allegedly being held responsible for his married life turning sour over the past couple of years.  Rani has had a rough ride to deal with.


But who doesn't face the dips of life? Rani Mukherjee is a woman of substance determined to remain so, as she works on for a silver lining through her clouds.


'Dil Bole Hadippa' from the look of it, seems just her chance. Co-starring Shahid Kapoor, its director Anurag Singh's debut venture, produced by Aditya Chopra. The bubbly 'Babli' plays a village girl 'Veera' this time, who's dream is to play cricket with legends like Dhoni and Tendulkar. Which is what brings upon her the transformation from Veera to 'Veer Pratap Singh'! Shahid meanwhile, Rohan on screen for his part, plays a professional county cricket team captain in England, back to his homeland to help his father's perpetually losing team from the past 8 years. With his adorable boy look, Shahid has a tendency to remind viewers of a much younger Rahul Dravid in his early days with the Indian international team!


And so, amidst a larger than life dream, a sport followed like a religion, and a goal to turn tables on a live game field, two young hearts fall in love!


Foot tapping music by Pritam Chakraborty, a Punjabi flavor to every aspect of the movie including its name and title track, and a list including Rakhi Sawant & Sherlyn Chopra, Dalip Tahil, Vallabh Vyas, Vrajesh Hirjee on its credits, 'Dil Bole Hadippa' due for release this September, is a promising entertainer for the audience, a promising addition to his spree of hits for Shahid, and a promising break for its gorgeous leading lady, Rani Mukherjee!