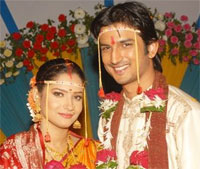 The lead actors of Zee TV's Pavitra Rishta, Ankita Lokhande and Sushant Singh Rajput, would have never imagined that a jolly good food eating competition would end up sending one of them to the hospital. But unfortunately that's exactly what happened. Recently, there were reports that Ankita Lokhande was suffering from stomach ache and viral fever.

However, our source gives a clear picture of what exactly went wrong with the girl. "Sushant is so fond of pav bhaji that he can eat up to six plates at once! Archana too is very fond of the dish and seeing Sushant's obsession for it, they took up a challenge of eating maximum plates of Pav Bhaaji at one go. The competition was very intense, so much so that in the spirit of it Archana didn't realize her limit and went on and on  so that she can win."

But things took a nasty turn the next day morning as Ankita couldn't stand the heat of this foodie in Sushant and fell ill. Says the source, "All that overeating gave a bad tummy ache to Archana. To top it, when she went to the doctor she was diagnosed with food poisoning!"

When contacted Sushant, he said, "Yes its true that we took the pav bhaaji contest jokingly , but when Ankita fell ill, I really felt bad. She woke up the next day with severe food poisoning. I  pray that she gets better".

We too pray Ankita recovers soon!

+ 2
12 years ago poor Archu any way good thing is even i like pav bhaji so i Sushant have one thing in common.

13 years ago awww poor swthrt..get well soon dear..her jodi with Sushant is so cute...luv them:)

Queen_GHT 13 years ago Aww,luv dem:)
Get well soon Ankita,we want our ArMan back in action:-)