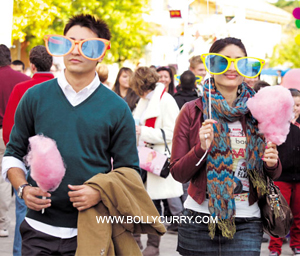 adi, has now been re-titled as Ek Main Aur Ekk Tu and the much awaited first look has finally been released!
Producer Karan Johar revealed the film's first look to the film on his twitter account recently: "http://on.Fb.Me/FirstLook-EkMainAurEkkTu and here's Dharma's next!" wrote a very excited KJo.
The first look is a promotional still from the movie which has the two actors standing in the middle of a busy street wearing peculiar, giant shades whilst feasting on cotton candies. So far, Kareena is tipped to play a hair-stylist and Imran a clean-freak architect who holds no tolerance for objects out of it's place.
Directed by Shakun Batra, the film is said to be a romantic comedy flowing on the conversational chemistry between the leads. If rumors are to be believed, the film is an abridged adaptation of What Happens In Vegas starring Ashton Kutcher and Cameron Diaz. However, Karan Johar had denied this speculation from the beginning.
Ek Main Aur Ekk Tu is expected to go on floors sometime around Valentine's Day, next year. Until then, here's the first look...