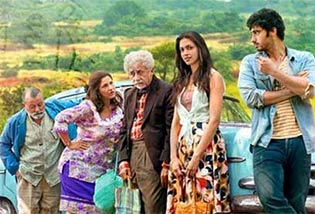 Within a day of its launch, the trailer of "Finding Fanny", an English language film by Indian director Homi Adajania, has found over a million views on YouTube. The movie's makers are "very happy" with the response.

The trailer is said to have got one million views within 22 hours of being uploaded on the online video-sharing website.

"Content is king and the reaction to 'Finding Fanny' trailer proves just that. This is the movie to watch out for this year and we are very happy with the response and feedback that we have been getting on the trailer," Vijay Singh, CEO, Fox Star Studios, said in a statement.

The quirky comedy stars Arjun Kapoor, Deepika Padukone, Naseeruddin Shah, Pankaj Kapur and Dimple Kapadia in key roles. The trailer itself is a peek-a-boo into the joyride that the film promises to be.

Producer Dinesh Vijan said: "'Finding Fanny' is a film that needed the support of the online community and we are overwhelmed with the response to our trailer. People, especially the youth, are loving the five odd ball characters and embracing the madness that they bring."