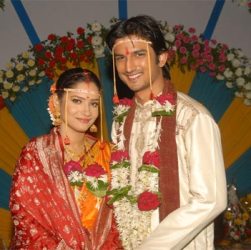 Finally, the time has come for Manav (Sushant Singh Rajput) and Archana (Ankita Lokhande) to take a decisive step in shaping up their future in a better way!! The latest promos of  Zee TV's Pavitra Rishta has indeed brought the smile back on the faces of the loyal audience, and the reunion of the protagonists will prove to be an icing on the cake, mainly because the ratings of th show had taken a beating due to their prolonged seperation.

A source reveals to TellyBuzz, "Soon Pavitra Rishta is going to experience a highpoint where Archana and Manav will make a decision to reunite. Manav has already got to know the true colors of Jaywant (Mahesh Shetty) being a bad guy, and this had made him restless. So Manav is trying his best to separate Jaywant from Archana."

"During the marriage ceremony of Archana and Jaywant, Manav will compel Archana to stop playing with each others feelings and declare in public that she is not marrying him.. Just as the wedding ceremony is to commence, they both plan to run away from their family members . They takes this drastic step as they realize that they both have always been thinknig about others, but none in their family have thought about their feelings", adds our source.

The month of November is going to be a visual treat for the viewers, as Archana and Manav will come together and stop becoming a prey to people's evil ideas. In between it was rumored that the show is taking a leap in the coming few weeks.

But our source informs us, "It was just a rumor, nothing as of now is going to happen.  Even if the leap does happen, it will happen ionly after Archana and Manav's reunion."

We contacted Sushant Singh Rajput who told us, "Yes, our reunion is finalized now but I can't divulge any further details about the track".

Get ready audience to witness Archana and Manav's reunion this November!

kaira.s 10 years ago why wud these guys take a divorce in the first place??? gosh after all that drama and hurting their families and playing with shavani and jaywant's feelings. making them negative with all that drama they cozed.. seriously this show has lost its charm. after all that love archana shows towrds her mother, she leaves her in the end and choses manav.... seriously people start showing somethin real for onces...

+ 4
10 years ago loved the reunion! the hug was really sweet and emotional

king55 10 years ago great news... I was very happy that manav and archana will reunite together. they should live happy & love together for long... i will waiting for friday's episode coming soon... enjoy and have fun...:))

10 years ago oh i heard dat ,they will not run away but manav will exchange himself with jay in mandap...

+ 3
10 years ago YAY, Finally the show is getting good. it was boring off but now its great again.