Mumbai, May 6 (IANS) 'Mudrank', the controversial film on the life of fake stamp paper scam kingpin Abdul Karim Telgi, is all set for release after getting final approval from a Pune civil court.

As directed by the court, the film was shown to Telgi in Yerwada jail, Pune April 22 after which he gave the green signal for the movie to be released. Telgi had earlier sought a permanent injunction banning the release of the film.

'Mudrank' is now expected to hit the theatres May 23.

'It is an unprecedented move that a film has been shown inside a cell. We are relieved now, as Telgi after seeing the film has given his consent for release,' said writer-director Shakir Sheikh from Pune, who has made a couple of films in Marathi.

'Mudrank' is Sheikh's first Hindi movie. It was completed by mid-2007, but waited for more than eight months to secure the censor certificate, the director told IANS at a press meet organised for the launch of the film here Monday.

The medium budget film, shot mainly in Pune, depicts Telgi's life story starting from his childhood to the stamp paper scam. With no big star cast, except two item songs by Rakhi Sawant and Sambhavna Seth, the film's selling point is Kailash Manav who is portraying the role of Telgi.

'Kailash Manav resembles Telgi to a great extent. In fact, the whole idea about the film came to my mind after meeting him. I thought that this man resembles Telgi so much that I should make a film with him playing the kingpin,' said Sheikh.

The music for the film has been scored by Bappi Lahiri and the star cast includes debutant Kailash Manav, Milind Gunaji, Nirmal Pandey, Shahbaz Khan, Anjan Shristav, and Amita Nangia, among others.

Rakhi Sawant is a phenomenal artist and a great human being: Salman ... 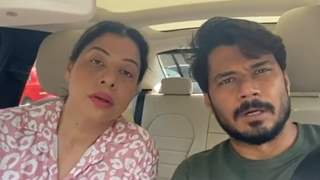 Kaveri Priyam and Shaalien Malhotra talk about upcoming twist in ...

exclusive
Exclusive Pravisht, Anchal and everyone else were shocked to learn about ...