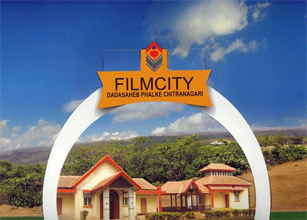 Mumbai, Sep 12 The 33-year-old Film City, also called Dadasaheb Phalke Chitranagari, spread over 520 acres with 16 air-conditioned studios and other facilities is set for a makeover. The Maharashtra government has decided to equip it with state-of-the-art facilities and also make it a tourist spot just like the Ramoji Rao Filmcity in Hyderabad.

'There are some development plans that we have just started working on. It's an ongoing process and will take some time before it gets implemented. We will first set a committee that will wholly work on the master plan,' the Film City public relations officer, who prefers to go by the single name of Saini, told IANS.

The Film City, in the northern suburb of Goregaon, was built by Maharashtra government's department of cultural affairs and was inaugurated Sep 26, 1977. Initially, it was called Maharashtra Film Stage and Cultural Development Corporation and in 2001 was renamed the Dadasaheb Phalke Chitranagari, but people prefer it calling Film city.

It will complete 34 years his month.

Ever since the structure has come up, every second film is shot here, said an official from the Film City adding, 'Among the recent ones are 'Bodyguard', 'Ready' and 'Devdas'. (TV show) Kaun Banega Crorepati is also being shot here,' he added.

The government has decided to equip it with lavish and state-of-the-art sets to make it a one-stop for filmmakers. Special arrangements will be made for tourists to have access to shoots.

Besides, a Bollywood museum is also being planned.

'We want that the Film City should become one of the best places for filmmaking. We also want it to become a sought after tourist spot. However, we won't open the entire Film City for tourism purposes. There will be just few places that will be open to the general public,' Saini said.

'We have decided to work on this plan because we used to get many requests from people so we decided that why not do something so that people can see what happens inside a film set and get a closer look at Bollywood,' he added.

General beautification and then maintenance of the area is also on cards.