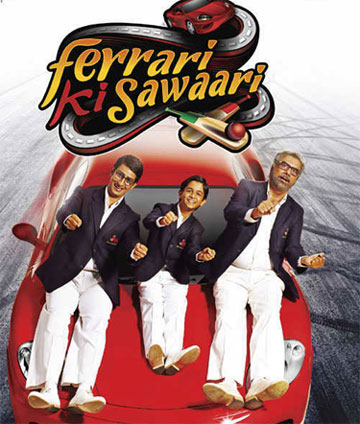 Director Rajesh Mapuskar, who wielded the megaphone for the first time for 'Ferrari Ki Sawaari', describes his directorial debut as a joyride with a great cast and crew.

'I never dreamt of making a film. I love music and art and this (film) is the amalgamation of it,' Mapuskar told IANS.

'It was a fun, joyride. There was no pressure from anyone. It was all from me. It was my first film so obviously you will have butterflies in the stomach. I was worried as to how I will do it but I had a great team to support me. All the worries just vanished when we started shooting,' he added.

'It was great to work with an actor like Sharman. He is a professional and natural actor. He really understands what a maker is trying to convey through the scene and the movie,' said Mapuskar who worked in '3 Idiots' as an assistant director.

'He is sharp, fast and he is a great actor. He has been brought up very well. All this shows in his performance. He comes from a very cultured, good family,' he added.

Releasing June 15, the film is written by Chopra who has centred the story on a father-son and how a Ferrari brings ups and downs in their lives in a funny manner.