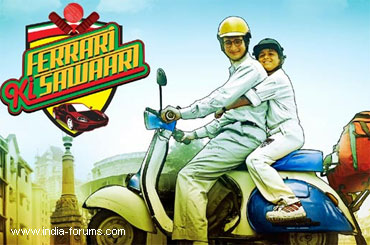 The soundtrack of 'Ferrari Ki Sawaari' does not take you on a rollercoaster ride, but with five lyricists at his helm, Pritam has managed to dole out a decent album. It has an array of tracks, which can manage to generate a happy and positive response from listeners.

The album starts off with 'Maara re', penned by Swanand Kirkire and crooned by Sonu Nigam, Rana Majumdar, Aishwarya Nigam and Ashish. A song dedicated to cricket, it comes at the height of the Indian Premier League (IPL) fever. A fun and frolic anthem, it impresses with its peppy composition and inspiring words. Special credit goes to Sonu Nigam for not dominating the song with his voice and providing ample space to the other singers.

Next up is the beautiful 'Rusy's theme', an instrumental track with a Spanish touch. The composition is very soothing to the ears and it can be heard on loop.

The third number is the much-hyped 'Mala jau de', which marks the entry of Vidya Balan into the world of item numbers. The song has elements of Lavani with Guru Thakur's lyrics getting an apt treatment by the refreshing voice of Urmila Dhangar. Pritam too has given a good and authentic composition. This one surely deserves kudos.

'Ae mere mann', crooned by Shyamantan Das, is a motivational song. His voice provides the perfect base for this superb track, which talks about a child's struggles in life and how he can overcome them. It also has a beautiful chorus.

It is followed by another peaceful song 'Good night', a sweet lullaby sung brilliantly by Priyani Vani Pandit. Its melodious tone slowly takes over your heart and soul, leaving you with a sweet comforting sensation.

Up next is the title track of the film 'Chal ghoomne', an upbeat number which instantly makes you jump with joy. Although Shaan is most prominent in the track, Boman Irani and Aayush Phukan's vocal support pack an extra punch in the song. It plays on perfectly with the theme of the film.

The last song in the album is 'Yeh mausambi si', a foxtrot kind of track sung by K. Mohan, with lyrics by Satyanshu and Devanshu Singh. The most appealing part of it is the whistling motif in the background.

Overall, the 'Ferrari Ki Sawaari' music album impresses with its positive energy and happy-go-lucky feel. The compositions are good and offer variety. There's something for everyone here.

(Bhaskar Pant can be contacted at pant.bhaskar@gmail.com)