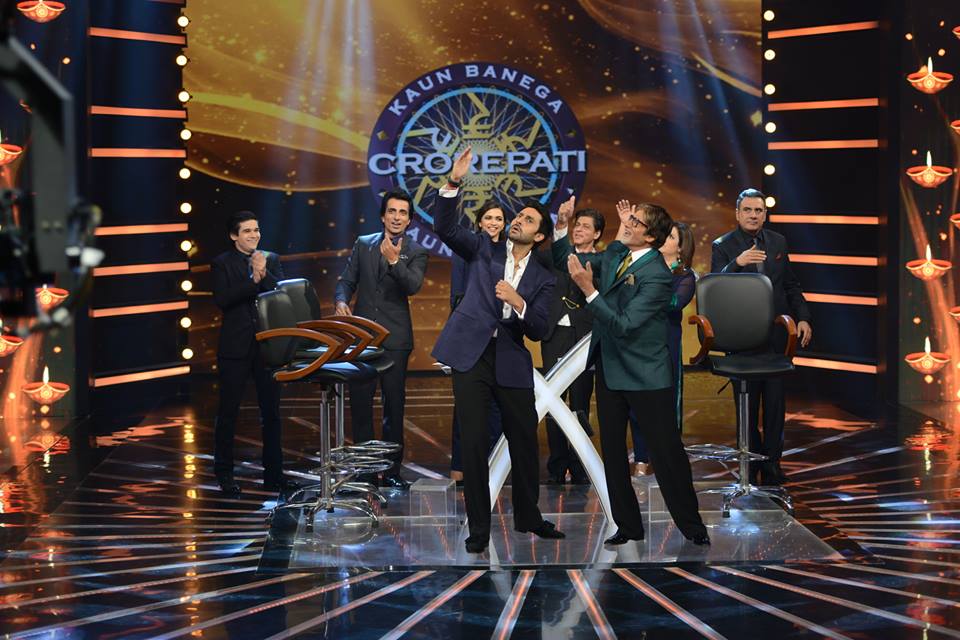 Television's popular game show Kaun Banega Crorepati 8 on Sony TV has become one of the biggest platforms for promotion. Thus for the the first time in the history of KBC, Amitabh Bachchan will play the game with his son Abhishek Bachchan who will be seated on the hot seat.
Yes you all heard it right, for the first time the father and son jodi will be seen together on the stage of Kaun Banega Crorepati 8. This episode will be a double treat for the audience to see a son answering the questions asked by his father who is the host of the show. Abhishek will be seen along with his whole cast of his upcoming film Happy New Year.
As audience already adore Amitabh Bachchan, the host of the show, Abhishek Bachchan's presence on the same stage will be like an icing on the cake.
Bigg B was elated about the entire cast making an appearance on the show and thus he posted a status on a social networking site," Aaj kuch ajab hi raha samaa .. Happy New Year film ke kalakaar sab ke sab KBC ke set par .. Aur phir jab sab ke sab aa hi gaye toh nach gana .. dhoom mach gayi .."
It will be very interesting to see this father-son playing Kaun Banega Crorepati along with Happy New Year cast.
Neha Jain
3 Likes

atominis 6 years ago KBC has too many movie promotions these days. Essence of quiz show is lost.

papia 9 years ago I really dont know why IF is giving false news to us. If its TRP is higher then it will be listed in the following link-

Guys dont believe this news. Its TRP is infact very poor. If you dont believe then go to the above link or you guys can also visit the following link.

I have nothing against this show but I just dont believe that IF is giving such a fake news. I really need clarification why did they do this?

aish_punk 9 years ago SO proud of you, hrithik :)
JD was an awesome show,and i think it deserved high TRPs

Renu13 9 years ago wow gr8 Hrithik you are the best actor, dancer & above all gud human being

prassy.kavi 9 years ago lobe you hrithik you are the best wether its in bollywood or in telly worly you rock always and every where.

shivani003 9 years ago JD is an ok show but its nowhere even near the level of DID...

Anyway one more thing, Iam doubtful about the numbers because JD didnt garner very high trps throughout its run as expected...

papia 9 years ago I love Hrittik but I have doubt in this news because till now Just Dance never reached in TOP ten in TRP according to TAM rating. So how can its trp become higher?

TheMaaneetian 9 years ago love u hrithik!!! ua re truly the best!!is there anything u cant do perfectly!!! haii...love u!! wacthe this show just for you and it was totally worh it!! whata sweet and genuine person he is! just dance was really awesome! congrats!

-Harshu- 9 years ago He's the BEST :D
Luv ya Duggu

Arnisha 9 years ago luv u HR ur so sweet n adorable his comments JD where gd tht he never hurt any 1's feeling, HR rocks n hpe 2 see him reali sn in nxt season of JD..
he has a heart of gold n the most nice human being n also he is very understanding n very emotional whn it cmes to eliminations .. luv u...