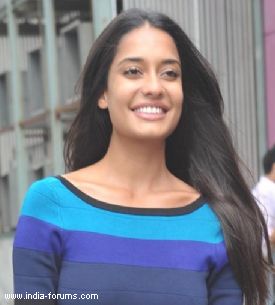 The small screen is full of ads of fairness creams but tall, dusky and gorgeous model Lisa Haydon says the Indian fashion industry is "open minded" about dusky beauties.

"Fashion is much more open minded to duskier skin, but I do not think they are prejudiced in any way to fair skin either," Lisa told IANS in an interview.

"Designers have always fawned over my skin, especially Tarun Tahiliani. I've definitely felt accepted brown skin and all. But fair girls like Shivani Kapoor were as loved too. I think the fashion world is just more open to all sorts of experimentation," said the 27-year-old.

The modelling industry in the country indeed has been open to dusky skin. Names like Noyonika Chatterjee, Laxmi Rana, Carol Gracias, Bhawna Sharma, Sapna Sharma, Tinu Verghese are a case in point.

Bollywood too, over a period of time, has been accepting of beauties like Sushmita Sen, Bipasha Basu, Priyanka Chopra, Nandita Das, Esha Gupta, Chitrangada Singh, Konkona Sen Sharma and Asin. Lisa was accepted too.

She made her acting debut with the 2010 film "Aisha" and was later seen in "Rascals". Currently, she hosts NDTV Good Times' "Kingfisher Supermodels", which is a hunt for a Kingfisher Calendar Girl.

The show will have its finale Saturday. Lisa believes such a platform does "a lot of favours for a model's career".

"It is because of the way the calendar is marketed, promoted and of course shot by Atul Kasbekar. It's a great way of being introduced to the whole business at once...and they are instantly catapulted onto a stage with girls that are well-established and respected in the industry. It just positions a model really well," said Lisa, who has been a part of the popular annual calendar in the past.

In her modelling career of eight years, Lisa has walked for most big designers in the country. Now she only walks the ramp when a designer "has specifically called for me or the show is going to be extra special".

"I think these days when life is so busy and I'm juggling acting, modelling and my organic skincare line - Naked by Lisa Haydon - that I do only the work that I'm specifically passionate about...and that may be in one of the many fashion weeks, but one must be choosy as well," she added.

On the film front, Lisa is awaiting the release of "Queen", which stars Kangana Ranaut in the lead. The film industry boasts a lot of names who went from the modelling field to the acting arena, but Lisa says the transition isn't "a rule of thumb for everyone".

"I started acting because I was offered films, and I wanted to go to drama school and do the film because I'm the kind of girl that will do everything once. Now of course that door has been opened, I will only pursue a project that is authentic to me," she said.