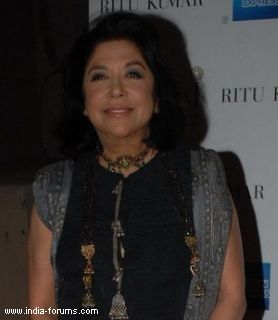 New Delhi, Sep 8 Ritu Kumar, a pioneer of the Indian fashion industry who has proved her mettle with her ethnic Indian creations, says the fashion world may look rosy from outside but in reality it makes for a very difficult career.

'The Indian fashion industry has grown very fast. It is now supported by the mainstream media. Visibility and turnover have increased exponentially, but there is a disconnect between what is written in the media and what the reality is in the fashion business. It is a very hard, difficult and turbulent career. Fashion looks more rosy than it is,' Kumar, who started her career 40 years ago, told IANS in an interview.

Kumar is considered as one of the first Indian designers who was a catalyst in giving a contemporary face to ancient crafts like zardozi, aari, gota and patti work. She not only used these handloom motifs in her collection but also promoted it in the international market.

The designer believes that with the high-end couture market evolving, these crafts will grow and evolve too.

Known for her ethnic Indian collections with a subtle touch of modernity, Kumar feels that her brand's 'forte lies in the traditional Indian clothes that draw heavily on the textile and embroidery heritage of India'.

'I believe that the condition of Indian art and craft in the fashion world is progressing day by day. High couture and high-end Indian fashion is almost solely craft-related and this keeps our heritage alive.

'One can make out from the fact that some of the past fabrics like chanderi, khadi, handlooms and organic cotton fabric are making a refreshing comeback and it will grow,' she added.

It was a humble beginning for Kumar, who started her journey with four hand-block printers and two tables in a small village near Kolkatta 40 years ago. While climbing the success ladder, she not only defined fashion but also became the first woman to introduce the boutique culture in India by launching her brand -- Ritu Kumar.

After winning an impressive clientele in the domestic market, she started retailing in Europe as early as in the 1970s.

Pointing out the difference between the two worlds, she said: 'India's fashion weeks are mostly indigenous and celebrate our uniqueness in colour, fabric and identity, whereas international shows are dominated by Euro-centric or American identities. Their collections remain same and are sold around the world, while Indian shows remain more India-related.'

If she splashed the ramp at various fashion weeks with her Indian clothes that boast of both bright and earthy colours and highlight traditional craftsmanship, Kumar also designed Bollywood projects like Deepa Mehta's 'Hollywood Bollywood' and her filmmaker son Ashvin Kumar's 'Little Terrorist'.

'Dia (Mirza) saw my Falaknuma collection and asked me to design the costumes for the film using some of the looks from the show. It looked like a fun project and I enjoyed it,' she said.

She feels that while working on a movie, one needs different sensibilities.

'Yes, it is different as a movie is character-based and has to follow a story. Ramp clothes follow a fashion pattern of the designer and the house. When I create designs for Bollywood movies, there are three things that come to mind - script, director and characters,' Kumar said.

In her four-decade long career Kumar has found a firm foothold in the fashion arena and now wants to show her creativity in interior designing, jewellery and accessories.

'I am soon going to foray into accessories, jewellery and the interior business. Also, there is a couture show which is planned in a theatrical format in November and an international show, the date of which is yet not confirmed,' she said.