View Profile
Award nights are a personal favorite of all Fashion Police officers. With all those lights and cameras, one just simply cannot escape the allure of the red carpet. This year's IIFA Awards were no exception, with the elites of Bollywood walking down the statement green carpet wrapped in their silks and satin, adding to the frenzy of this much hyped and awaited event. But in spite of all the glitz and glamour, we didn't miss Richa Chadda wearing the same Falguni and Shane outfit that we had previously sighted on Sameera Reddy. 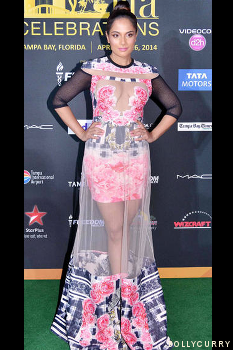 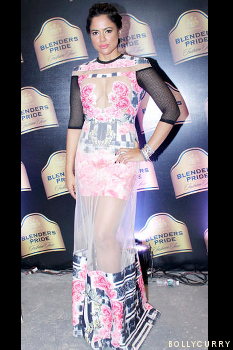 Now this pink sheer number isn't exactly our favorite in the first place and to see two of our divas sport it, disappointment doesn't quite cover it. Richa Chadda chose this number to walk the IIFA Green Carpet, held in Tampa, Florida. The sheer dress offered a good amount of skin show, especially near the bust area, but why would one exactly wear it for an awards night? It surely looks more appropriate for a platform such as the Met Gala. Thankfully Chadda's subtle make-up and minimal accessories kept the look from going further downhill. With hair done in a simple top-knot, this dress was definitely a major faux pas for the otherwise strong actress.
Sameera Reddy was previously seen wearing the same outfit at the press meet for Blenders Pride Fashion Tour. Not that she scored any better. The outfit was a disaster followed by a thick layer of unwanted caked make-up. We 're still trying to figure out why she would use such a bright pink for the lips when the dress already had enough. The hair, which was done in an elegantly twisted bun, seems to be the only saving soul here but not when paired with the boldness of the dress. In all, Miss. Reddy made our eyes cringe in this dress, leaving us praying with all our might that we don't see such number again.
The Fashion Police had an arduous time deciding who wore it worse because surely neither wore it better. We would love to declare both sightings as fashion fails and move on and so that is exactly what we'll do. It requires a certain calibre of delicateness and boldness to carry off a dress like that, which Chadda nor Reddy seem to have achieved. With such results, it is injustice to crown one with the winner's title.
On that bombshell, we wrap up this edition of Fashion Face-Off. Impart on us your view on who you thought wore the dress better, or worse, and we'll be sure to read your comments. 'Til next time, hasta la vista!
Author: Urooj K.
Editor(s): Saraa K and Jenifer Y.
Graphics: Marsh P.
Do you have a suggestion or comment for BollyCurry? Drop us a PM at BC_Dropbox today.