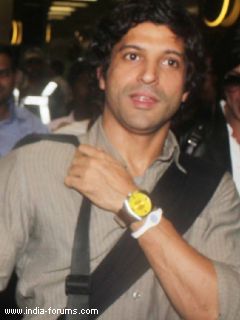 As Mumbai's civic body elections are lined up for later this year, filmmaker-actor Farhan Akhtar, known for his youth-centric dramas, has reached out to his young audiences and urged them to vote for the right candidate.

"It is important to do some research about the candidate who you plan to vote for. You should avoid voting for that particular party, whom your family or friends are following over the years, without seeking any information about the candidate," said Akhtar.

"It's very important to find out about your candidates in your area and then vote accordingly. It is your democratic right and one big difference you can make in the process of how this country would be governed. So it is important to go out and do it," the 38-year-old said here at the launch of a novel "The Wednesday Soul".

Akhtar is known for his directorial projects like "Dil Chahta Hai", "Lakshya", "Don The Chase Begins" and "Don 2: The Chase Continues". He has acted in "Rock On!!", "Luck By Chance", "Karthik Calling Karthik" and "Zindagi Na Milegi Dobara".

Meanwhile, Farhan is busy toning up for his role in Rakeysh Omprakash Mehra's "Bhaag Milkha Bhaag", in which he will feature opposite Sonam Kapoor.