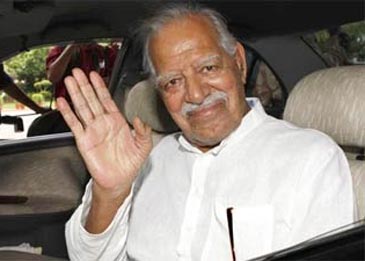 The legend's final journey started around 3 p.m. from his residence in Juhu. His body was placed on a mini-truck decorated with colourful flowers, and taken to the Pawan Hans crematorium, where his last rites were conducted.

Despite the security arrangements, Dara Singh's grieving fans managed to pay homage - they were showering flower petals on the late wrestler's body.

Raza Murad, Rishi Kapoor, Fardeen Khan and Dolly Bindra were among the Bollywood celebrities who came for the last rites.

Former Mumbai Congress chief Kripashankar Singh remembered Dara Singh for stint as a wrestler-actor and added: "He never misused his friends. I still remember him for his role in 'Ramayan'."

Dara Singh died at his home here Thursday morning following a brief illness. He was 84.

He had a cardiac problem on July 7 and was rushed to Kokilaben Dhirubhai Ambani Hospital by his family members. He had been in a critical condition since then.

He is survived by his wife and six children - three sons and three daughters. One of his sons, Vindu Dara Singh, is a known name in showbiz.

From Sid, Bunny to Ved, Barfi: Life Lessons that Ranbir ...
10 minutes ago

exclusive
Exclusive Bigg Boss 14: Sakshi Chopra decides to give the show a miss ...
47 minutes ago