View Profile
Priya Bhatija who has won many hearts through her roles as Afreen in Khwahish and Ganga in Kasamh Se will now be seen as Nandini Parikh in NDTV Imagine's Basera, which launches on 17th August at 9.30 PM. 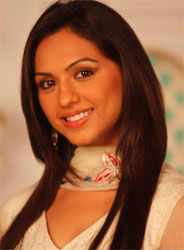 Featured Video
On a frank chat with Telly Buzz, Priya lets us know that she is someone who values her family beyond anything else and is grateful to have great parents as well as in-laws.

Priya tells us, "Jatin and I always knew that we wanted to spend the rest of our lives with each other but that we would get married within three years of dating was totally unexpected. However, Jatin's father had an untimely demise and his mom was left alone. So it was he who suggested that if I enter their family it will be a great support for his mother."

The petite actress further adds, "Initially I was apprehensive. I had no doubts about Jatin but whether I as a girl was ready for marriage. But when I thought about it, it only made more sense. After all what was the point procrastinating our marriage when we obviously knew that we were happy in each others' company."

Priya was never made to regret her decision.  She says, "I'm really happy after taking the plunge. I have a very supportive mother-in-law who has no qualms about my profession. The best part is, now me and Jatin live under the same roof."

Even though a few compromises accompany her married life, the actress doesn't mind that in the light of the larger happiness. She tells us, "Of course, things don't remain the same after marriage. There are a few areas where you need to make adjustments. But they are very few. For example, I can't wear sleeveless and jeans when some of our relatives come to visit us (Laughs)."

Since Priya and Jatin got married due to circumstances, they never had the time to go for their honeymoon. Each was committed to their projects. Priya tells us, "Yeah, we got married and then immediately got back to work. So that's why we are planning this December to go fut. It will most probably be Bali in Indonesia."

13 years ago acting is amazing in basera. also loved her khwaish and wish u a very happy married life !!!

+ 2
13 years ago loving her in basera....and i must say a wise dcision to get married
wish her and jatin happy married life :)

13 years ago Jatin Shah, sure is a good looking guy ... hope you hve a blissful married life!

+ 2
13 years ago Priya your so lucky to marry jatin, i mean im soo crazy bout him. who woudnt want to marry him.
but you both look shoo cute 2geda.

+ 2
13 years ago she' s really cool and im happy she made the right decision. btw: what was her age when she got married? she must be really young when she dated him (3 yrs) if she got married early too.

13 years ago awww so cute...i always loved Priya and cant wait to see her again onscreen=]

"The best part is, now me and Jatin live under the same roof."
ohhh how sweet....n loving!!!

poor guys...no time for their honeymoon!!!

hope dey gets more time to spend fr each other!!1

And she looks even hotter after marriage!!!!