EyeQube Studios Pvt. Ltd., a joint venture between Eros International Plc and Charles Darby, announced on April 15 that the state-of-the-art visual effect studio in Mumbai has commenced operations. The company has officially begun its work on the much-awaited films, Aladin and Drona. A slate of other feature film work will be announced within the next few months. 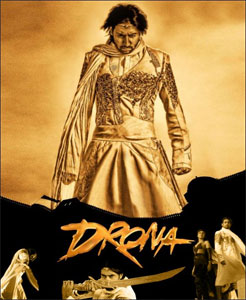 Featured Video
Meanwhile, EyeQube continues its enormous recruitment drive to help service its vast amount of production work over the coming months and years. Spread across an area of 20,000 square feet, the studio has one of the best facilities for visual effects in with the latest state of the art hardware and software. The company will be utilizing both Auto Deskï¿½s Maya for 3D and the foundryï¿½s Nuke, as itï¿½s primary composite program.

Charles Darby, Creative Director of EyeQube and Senior Visual Effects Supervisor said, ï¿½Iï¿½m extremely proud to see EyeQube open itï¿½s doors and although we have a fabulous set-up technically, Iï¿½m most proud to see a facility that feels creative and approaches the work in a more artistic manner. EyeQube is an ideas factory, we make possibilities and thatï¿½s where our future lays. We will develop each show we come into contact with and really harness ï¿½s untapped potential, itï¿½s artists, whilst giving them a strict production structure. This year we will be unwrapping a number of really exciting new projects and every one of them is a wonderful opportunity for us to do something new.ï¿½

ï¿½Six months ago, we announced the launch of a spectacular dream ï¿½ a state-of-the-art visual effects facility in promising to position Indian films on par with the best in . Today, we are very pleased to announce the dream has formally been given shape in the form of EyeQube Studios. Following Aladin and Drona, through EyeQube we aim to announce shortly several more exciting content driven projects with a belief in taking Indian cinema to new heightsï¿½, added Sunil Lulla, President, Eros International, .

EyeQube will produce not only Indian films with high-end visual effects, but also be selectively involved with a few prestigious international projects. The company will primarily handle visual effects for all of Eros Internationalï¿½s top-end productions and co-Productions.

Hoping the studios finally opens up and becomes a boon for Indian Cinema!