View Profile
Ananth Mahadevan doesn't hide the fact that his 'Anamika - The Untold Story' is based on 'Rebecca'. However, he insists that his Dino Morea-Minissha Lamba-Koena Mitra starrer is closer to the novel 'Rebecca' by Daphne Du Maurier than Alfred Hitchcock's 1940 classic 'Rebecca' which starred Laurence Olivier, Joan Fontaine and Dame Judith Anderson.

"The great Hitchcock's 'Rebecca' had more or less stayed true to the book. However, it is not known to many that even Hitchcock found a hitch in 'Rebecca'. Those who 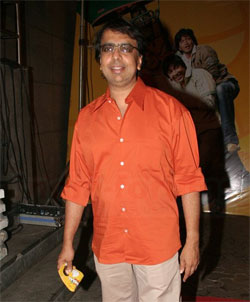 Featured Video
have read the book know that when Rebecca's body was found no one knew how did she die", reveals Ananth Mahadevan.

Please carry on. "Well, the twist in the tale comes later in the story when the body is found. There is a mystery around whether she had committed suicide or she had been murdered. The question which comes to mind is why wasn't the actual cause identified when the body was found for the first time? In the end, some of the queries were left open and the conclusion was seemingly convenient."

Is that the reason why 'Anamika' has been treated slightly different than 'Rebecca'?

"Exactly", exclaims Ananth Mahadevan, "This is why we chose to rewrite the entire second half while adapting 'Rebecca'. We wanted to have a proper closing and finish to the tale with far more convincing culmination. Me along with my writer worked together to get an interesting sympathetic twist to the tale and challenge the theory around whether the husband was really the culprit? Even though I may say so to myself, I am quite confident that we have been able to achieve the suspense angle bang on."

'Anamika', which has music by Anu Malik and lyrics by Sameer is aiming for a 2nd May release.

A shy ladies' companion, staying in Monte Carlo with her stuffy employer, meets the wealthy Maxim de Winter. She and Max fall in love, marry and return to Manderlay, his large country estate in Cornwall. Max is still troubled by the death of his first wife, Rebecca, in a boating accident the year before. The second Mrs. de Winter clashes with the housekeeper, Mrs. Danvers, and discovers that Rebecca still has a strange hold on everyone at Manderlay.